Casing the Joint // Kinstretch Mobility Movement Comes to the Island

Are you sitting down? If you’re like most people, you sit way too much—at your desk, in the car, on the sofa—and your joints are likely paying the price. Or perhaps you’re a sports junkie, logging major miles cycling, running the rock or working out at the gym. Whether you spend your days at rest or at play, combatting the cumulative stresses our bodies rack up is serious business.

Chadburn said that after practicing the system upon which Kinstretch classes are based, “we saw such differences in our own bodies that we realized [the Kinstretch founders] were onto something.”

Reitz explained that Kinstretch is designed to work the body both in small isolations and with combined movements, systematically training the joints from neck to toe. Specific instructor-guided positions and exercises challenge each joint, as well as its surrounding muscles and tissues, moving through the full potential range of motion with motor control. She said the idea is to train the tissue to control greater and greater loads at end-range positions, thereby creating stability in the joints relatively quickly. The focus on active flexibility—using muscles to move the body, rather than passively using gravity or props—is fundamental to the approach. “It’s based on science and research that has been around, but is now compiled in a logical way,” said Chadburn.

Although Chadburn and Reitz have worked as PTs for nearly a decade, they especially like the results they are seeing since incorporating Kinstretch principles into their practices and launching classes. “We are able to affect our patients who have stubborn symptoms in a more lasting way,” said Chadburn. “They’re not bouncing back here as frequently. This system changes their bodies. I see people two years after they started—they go from zero to 40 degrees of internal hip rotation, which helps their knees, hips and low back all hurt less.”

Outside of class, the practice allows patients to continue their progress. “It gives the client empowerment to work on things; it’s a way to keep things going without one-on- one,” said Reitz. “You can do it in your bedroom for five minutes a day and that would be beneficial. You learn so much about your body—it’s an education as well as a workout.”

Early Kinstretch adopters include everyone from the Seattle Mariners to mixed martial arts fighters. For two years the Bainbridge High School cross-country team has been practicing Kinstretch with Chadburn, who has worked as a volunteer assistant coach for the past six seasons. According to head coach Anne Howard Lindquist, “It has helped our runners get stronger and faster, and has reduced season-ending injuries.” The high school runners fondly call the exercises “deceptively hard” and “enjoyably uncomfortable.”

“With teenagers, especially athletes, it’s all about teaching them body control to increase coordination and safety,” said Reitz.

Postpartum bodies can benefit from the system as well, said Reitz. “Key areas that women have trouble with after they have been pregnant are the spine, pelvis and hips. Kinstretch helps them get back in touch with their bodies, regain better posture and improve pelvic control.”

Although all sorts of people may benefit from the practice, both therapists emphasized that classes are intended to supplement, not replace, other physical activity. “We’re trying to help you build joint prerequisites, motor control and range of motion,” said Chadburn.

“This is one of the healthiest and most active populations I’ve ever lived in,” said Reitz. “A lot of people are so focused on the sweat, but then they’re frustrated because they get repeatedly injured and can’t do what they want to do, which is be active. This is a way to keep them doing what they really love.” 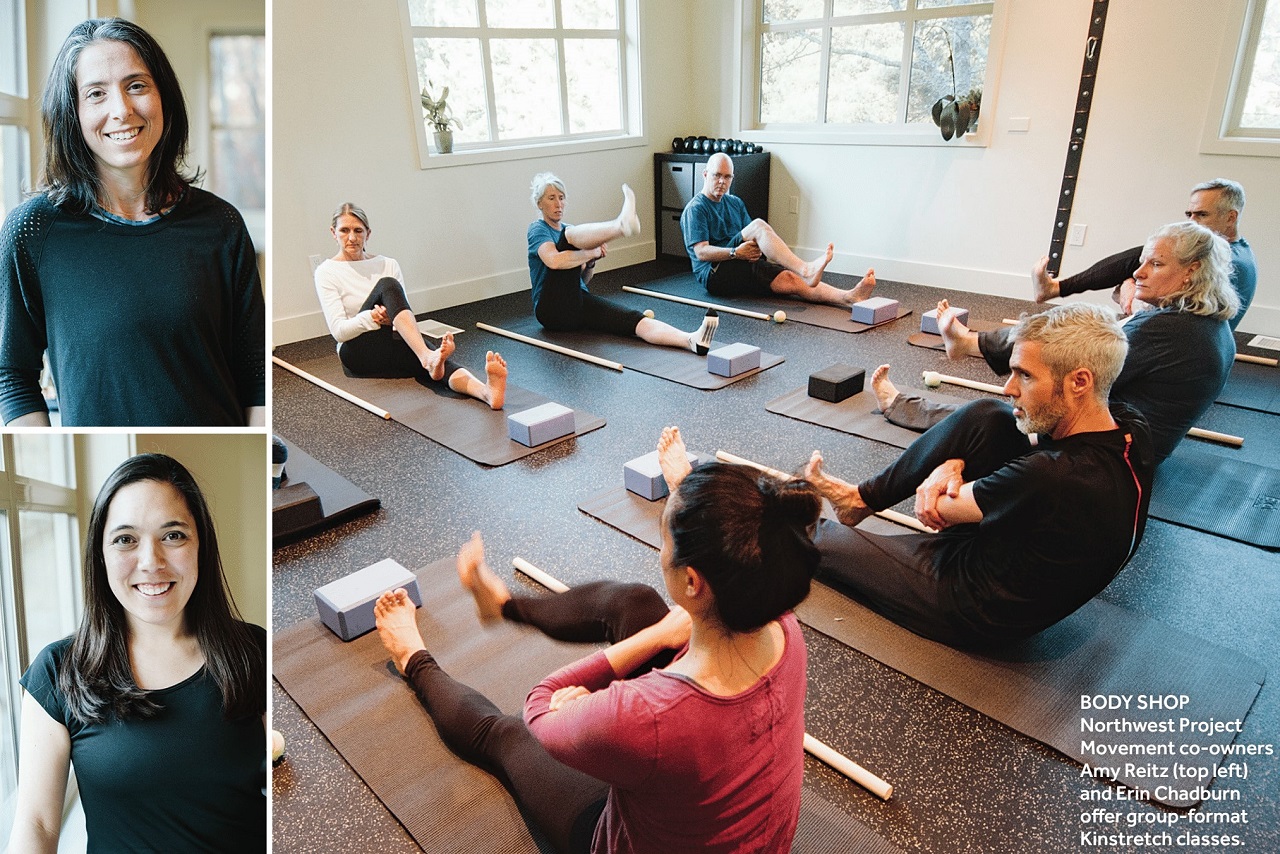