Appellations are not built overnight. The time from a wine region’s birth to its actualization—from vineyard to cellar, and from tasting room to award—is not measured in months, but in years, decades and centuries.

Although in its relative winemaking infancy, Bainbridge is progressively staking its place on the map. Home to at least eight wineries producing between a few hundred to a couple thousand cases annually, the island has over the past several years become a destination for connoisseurs piqued by the emergent new world winemaking.

Beyond the wines, its wineries have grown into a social staple for locals, many hosting regular live music and events. “When we first started, all the wineries were basically at people’s houses,” said Matt Albee, owner and vintner of Eleven Winery.

Over the years, the island’s wine scene has expanded into elegant tasting rooms and warehouses full of casks and fermentation tanks, each vintner and winery with its own unique path to success. Albee, for instance, embarked on the path to becoming a winemaker because he “couldn’t make a living as a bicycle racer.

”Over the past decade he has seen his enterprise outgrow his garage to become the island’s largest winery, producing around 2,500 cases a year. “Everyone [in the industry] has had a second job at one time or another, ”joked Amelia Wynn Winery owner Paul Bianchi, whose wine has won multiple awards, including an impressive collection of double golds and best-of-classes.

Bianchi, who also works in construction, said that his other vocation helped support his winemaking hobby for almost eight years before he managed to turn a profit. One reason for the growing success of the island’s wine industry has been cooperation among the wineries, most notably the formation of the Winery Alliance of Bainbridge Island (WABI), which markets the island and its collection of wineries as a tourist attraction.

Hugh Remash, founder and consultant vintner at Eagle Harbor Wine Co., began the association and encouraged Bianchi and others to turn their hobbies into a profession. “Making 50 gallons of wine is one thing,” said Remash, “doing [a full-scale winery] is entirely different.” Winemaking is a notoriously laborious and time-consuming industry.

Working with vineyards to choose specific grapes, curing, fermenting, aging, and finally bottling the wine is a process that often takes years. Within that undertaking, each vintner adds his or her own unique touch.

Emily Parsons, owner of Eagle Harbor Wine Co., explained her and Remash’s approach as minimalist, with a focus on using natural processes in the place of chemical intervention. Others focus on organic methods, or specialize in certain varietals, experimenting over the years to discover their specialty.

Bianchi likened it to any other craft that must be learned over time. “But,” he qualified, “you also need to recognize that there’s always room for improvement.” For all vintners, the process begins by working with the vineyards.

“You can’t just walk into the best vineyards in Washington and say, ‘I want to buy some of your fruit,’” explained Wendy Armstrong, Bianchi’s wife and partner at Amelia Wynn. “It’s their fruit, so it’s their reputation too.” Much of the island winemakers’ favored fruit is sourced from Pacific Northwest growers.

Washington state’s grapes profit from the state’s warm daytimes and contrasting cool nights, a recipe for the refreshing acidity many of the region’s wines are known for. Its leading subregions include the Columbia, Walla Walla and Yakima valleys.
Betsey Wittick is well acquainted with the growing side of the process. For 30 years she has spearheaded the operation at Bainbridge Vineyards, the only winery on the island to grow all of its own grapes. “I’ve actually planted a lot of our vineyards, so I have a strong emotional connection to the wine and to the plants it comes from.

”Their hope as a winery, she explained, is to draw those who are attracted to the idea of locally sourced food and produce. “Each wine will have a story,” she said, “and for us, the story is ‘it’s all grown here. “How to describe the story of winemaking on Bainbridge? One might say it has a broad but delicate entry with notes of persistence and a long, satisfying finish. 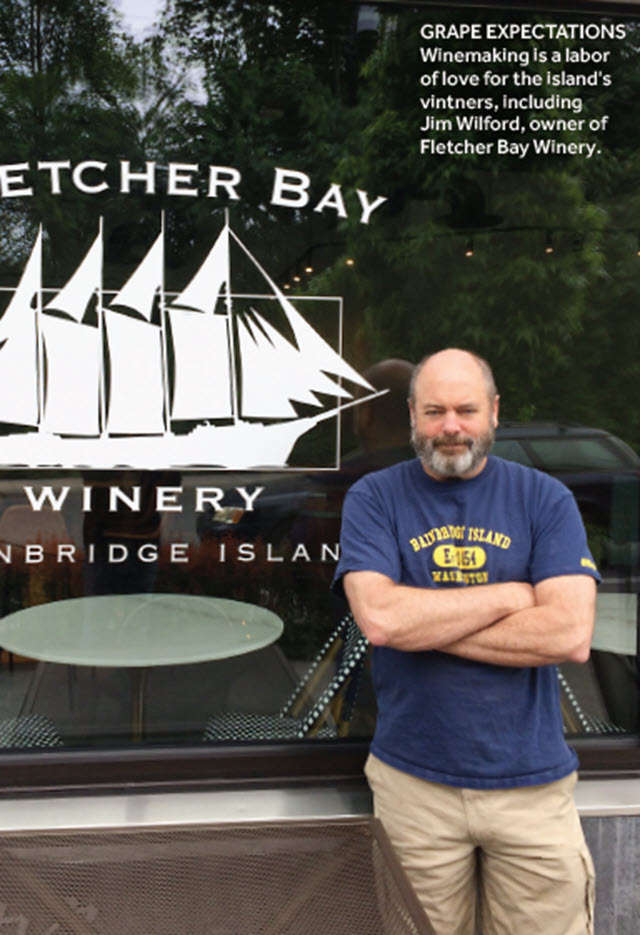 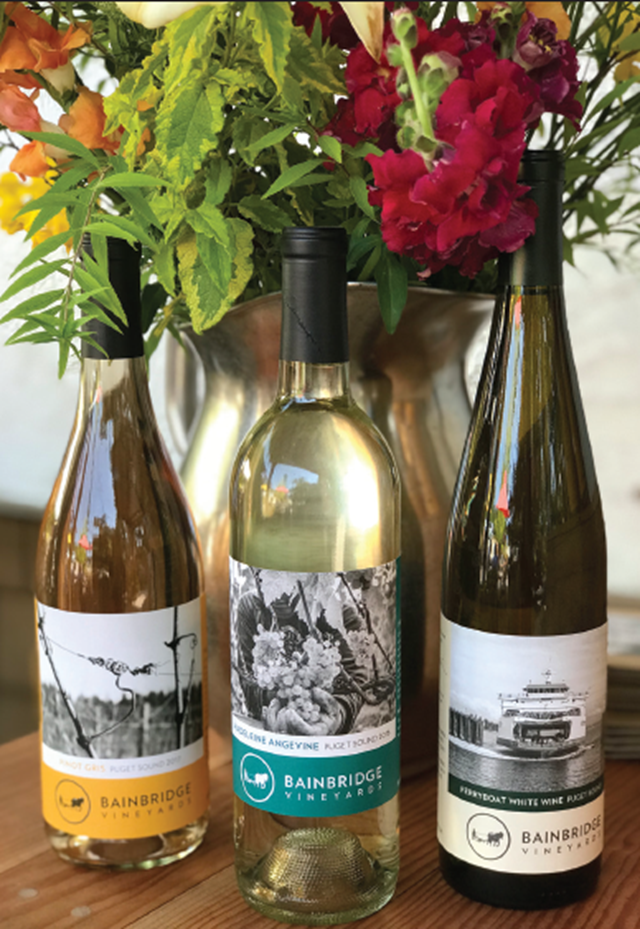 Bainbridge in a Bottle // Island Winemakers Share Their Passion