Bainbridge in a Bottle // Island Winemakers Share Their Passion

Did you know that our little island in the cool and damp Puget Sound is home to eight wineries, two of which grow at least some of their own grapes? Why so many wineries for a town of 23,000? Winemaker Matt Albee speaks for himself, but probably all of the other island winemakers would agree. “I chose to start a winery on Bainbridge because it is a great place to live, not because it’s a great place to have a winery,” he said. “It’s actually quite a difficult place to have a winery, and it has taken many years of losses to finally build it up to a sustainable level. I think this speaks to what drives all of us—passion. It’s not about the island being a great place for wineries. It’s about the island being a great place for people who are passionate about wine.”

Local vintner Paul Bianchi traces island winemaking back to 1986, when a group of his friends on Lytle Road produced a single gallon of reportedly “undrinkable” blackberry wine. One of the original members of that group, Jeff Owen, went on to open Rich Passage Winery in 1997. Bianchi began to dabble in winemaking with the Lytle Road bunch in 1998, eventually honing his skills to a level that allowed him to open his own winery in 2008. “Winemaking is a craft,” he said, “and if you’re going to make wine, you want to do it well. The test is whether, as a craftsperson, you can elevate your craft to the point where people will pay you to make something great from raw materials.”

Most of the wine produced on the island is made with grapes grown in eastern Washington, where it’s hotter, drier and more conducive to ripening fruit. “For the past 22 years we have been sourcing our grapes from Upland Vineyards located on Snipes Mountain in the Yakima Valley,” said winemaker Alphonse de Klerk. “Considered the oldest wine growing area, Snipes Mountain was first planted in grapes in 1917. We transport our grapes over the pass and on the ferry by truck about eight times a year.”

That’s not to say growing grapes locally is utterly impossible. Vintner Mike Lempriere grows grapes on the island as well as buying them from eastern Washington. “It’s not that hard to grow grapes,” he said, “you merely have to be careful and pay attention. I don’t want to trivialize what we do—in our cool climate we do have years where we simply cannot ripen any grape.”

Winemaker Betsey Wittick, who locally grows all of the grapes that go into her wines, noted, “This area is very close, from a climate standpoint, to the Loire Valley [in France] where many wines are grown. We have about the same seasonal temperatures and the same
total yearly rainfall as that region. Actually, we are different from the Loire and many French and German wine-growing regions in that we are actually drier during the growing season than most of them!”

How much wine can 23,000 people drink? “The demographics of our island suggest a very high per capita wine consumption, but I would say our number one customer demographic is the millennials that come over from Seattle and King County,” said vintner Jim Wilford. But Lempriere pointed out, “The Bainbridge Island Farmers’ Market has a core of rabid locavores who come week after week, rain or shine. These people care about local!”

For winemaker Hugh Remash, bottling Bainbridge involves more than where the grapes were grown. “My work is to bring this year and that place and those grapes to someone’s glass and table, transformed into joyous wine,” Remash said. “When, in the end, at last my wine is in the glass, I hope it is a pleasure in someone’s life. I hope they find it distinctive and delicious, attuned to the place it came from. Wine is simple to make yet maddeningly unpredictable and complex. Like cats. Like poetry.” 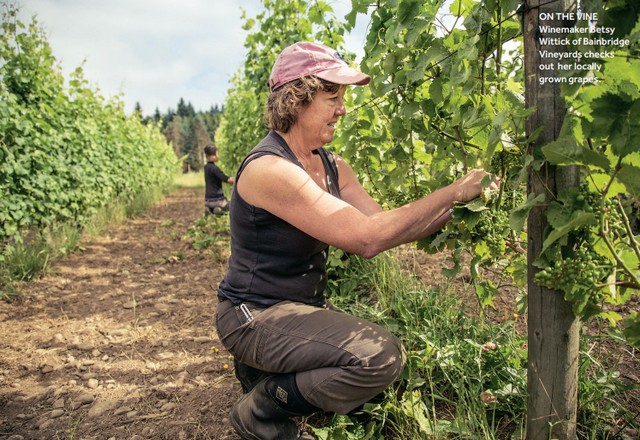 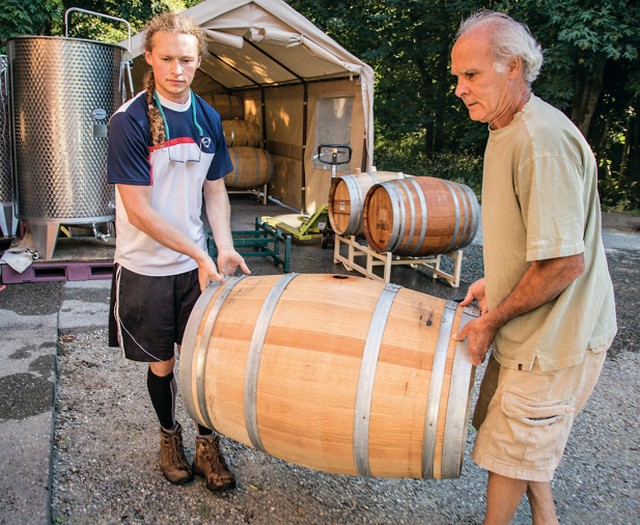 From Our Farms to Our Tables // How to Shop, Cook and Eat Locally