Jeremy Brown likes to say he was born in a pub. While that’s not quite the case, he does come from a hearty line of British publicans and pub workers, and his easygoing way with wine and words is certainly rooted in his upbringing in and around pubs in his native England. These days, Jeremy runs the beer, wine, spirits and general good cheer department at T&C.

How did you get from tour bus driver to wine expert?

We toured all over Europe, and our clientele were mostly backpackers. Whenever there might be an option to go to, say, a parfumerie, like in France, I’d go to a vineyard instead. There was always a free tasting, and for travelers on a budget, free wine is a good thing. So, I ended up learning a lot about wine.

Is it true you met your wife on the bus?

Kate and a friend were on a tour all over Ireland with me. She and I got on well, and I sent her a letter from the road so that we could meet up in London. We went to Wales for the weekend. She stayed in Europe until she ran out of money. We had a long distance relationship for a few years but after 9/11 we decided we didn’t want to be apart anymore. We got married in 2002.

For turkey, I like a great Oregon Pinot Noir or a dry Gewurztraminer from California. For the vegetarians a nice German Riesling or a Cabernet Franc, which pairs well because of the vegetal flavors. Thanksgiving morning is my favorite time to work. The 10 a.m. ferry unloads, and everyone coming in is looking for wine to bring to their hosts, and I usually know what their hosts are planning to serve!

You recently had a big health scare. What happened, and how are you doing now?

On April 19 I was 57 miles into the 63-mile Daffodil Classic. I had just gotten back on the bike at a rest stop. Next thing I knew I woke up six days later in the hospital. I had several blockages which caused a heart attack. Luckily for me, a man working in his yard saw me go down and came out and started CPR right away. He was doing so well when the EMTs arrived, they just let him carry on while they got the paddles ready. I ended up having two surgeries and lots of cardiac rehab. I’ve been back at work since June 25. The support from the community has been amazing.

I was backpacking in Australia in 1998. I got a job in an old hotel with a liquor shop in the basement. The shop was closed down because a tunnel was being built, and we found a case of Grange Hermitage Shiraz, a rare Robert Parker 100-point wine. It’s a wine people store away because it’s meant to be aged; that’s probably why it got missed at the auction. The two owners and I opened three bottles and drank them right there. It was truly incredible.

Red wine is supposed to be good for your heart. Thoughts?

Right, a glass of red wine a day is supposed to be good for the heart. I guess I was way off. Maybe it’s a bottle a day. 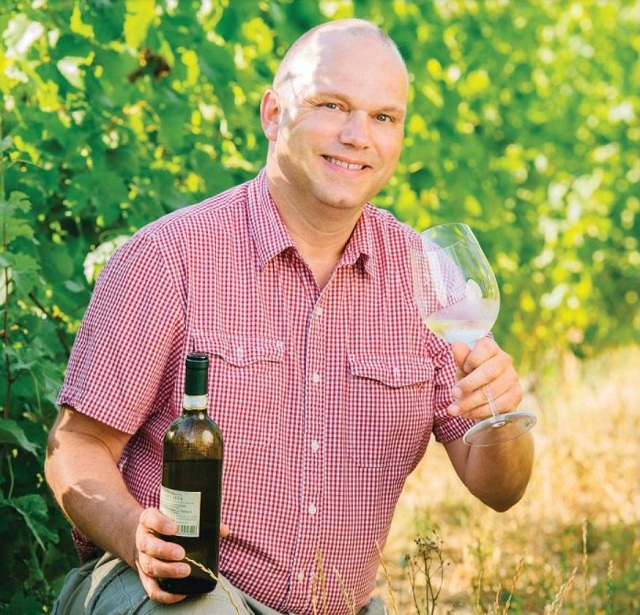