For New York Times best-selling author Susan Wiggs, romance is always in the air, or perhaps, more accurately, in the water. For 26 of her prolific 30 years as a published romance novelist, Bainbridge has been home; and while Wiggs, her stories, and characters travel worldwide, she counts herself fortunate to live and work surrounded by the waters of Puget Sound, even traveling via boat to writer’s group meetings in Port Orchard or Bremerton when weather permits.

“The truth is, a writer can—and should be able to— write from anywhere,” said Wiggs, who has crafted stories in train stations, spare rooms and airports across the globe. “The passion to write isn’t tied to a particular setting,” said Wiggs, “but being on Bainbridge has been a lovely blessing.”

Wiggs likes to say she’s written since the womb. “Before I could even write, I dictated stories to my mom and she’d write them down.” Despite writing her first novel, A Book About Some Bad Kids , at age 8, Wiggs initially declined pursuing a writing or literary degree. But a chance writing course at Harvard, while getting her master’s in education, finally solidified the itch.

“My first two efforts—historical romances—never saw the light of day,” said Wiggs, “but they did teach me the business of publishing.”

Her third attempt, Texas Wildflower , proved a charm, and was published in 1987 while Wiggs, then 27, was working as a math teacher in Texas. By 1992, when she moved to Bainbridge, she’d become a full-time author and a mother. Though professing to feel like a rank beginner at the start of each new book, Wiggs has written more than 50 novels, many of which have been translated into numerous languages. She is a three-time recipient of a Romance Writers of America RITA Award, including once for Best Romance of the year. Twice named a Career Achievement Winner by Romantic Times , Wiggs has also received the Holt Medallion, the Colorado Award of Excellence and the Peninsula Romance Writers of America Blue Boa Award.

As in all genre writing, romance has prescribed publishing guidelines and reader expectations, and Wiggs doesn’t disappoint. In both her historical and contemporary fiction, she offers attraction and drama, relationships pitted against difficult odds and life’s natural challenges, and the eventual overcoming of those obstacles. And, predictably, there is sex, although Wiggs leaves that mostly to her readers’ imaginations.

“Within the romance parameters there is a big variety,” said Wiggs, who handwrites all her drafts, “and a writer must find her creativity within the genre. My natural voice came up the more I wrote.” In 2001, in her book The You I Never Knew , Wiggs intentionally shifted towards contemporary, less prescribed romance writing, while still blending history into the plots. In her latest book, Map of the Heart , which hits shelves August 2017, her main character discovers old photos that eventually lead her to the south of France and a little known heroic event of World War II.

“Susan’s a good storyteller,” said Victoria Irwin, event manager for Eagle Harbor Book Co. “She weaves a really interesting story, utilizing key historic moments and she does it in a beautiful way.”

While Wiggs makes no pretense at deep literature, her writing nonetheless holds depth; a gentle rhythm of everyday people trying to succeed and connect through the circumstances of their lives. Her characters are much like Wiggs herself—genuine, unpretentious, kind—caught up in the process of living, loving and discovering their life’s path.

Bainbridge resident Susan Rauch especially likes Wiggs’ Lakeshore Chronicles , an 11-book series set at a lake in upstate New York. “Her books take me away to another world, with ordinary people I can picture knowing,” Rauch said. “I like them all.”

It is perhaps that relatability, and Wiggs’ accessibility, that garners her a devoted fan base. Wiggs is generous with her readers, connecting via Facebook, Twitter and at various live events. This March, she participated in a 10-day Carribbean “Romance and Mystery” cruise, where readers met, dined and relaxed with Wiggs and her good friend, mystery-writer Elisabeth George. Greatly supportive of independent bookstores, Wiggs regularly holds readings and book signings, not only to promote her own books, but also to foster community and support literacy programs.

One to two times per year, islanders can meet Wiggs along with a group of other local writers, the Seattle7Writers, at Eagle Harbor Book Co. for events benefitting the community. A list of their upcoming events can be found at seattle7writers.org. 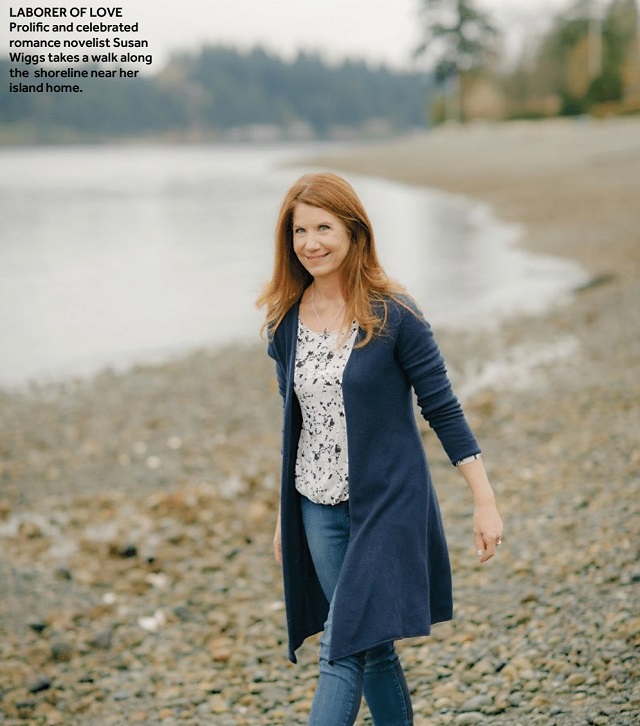