In late 2013, Sakai Intermediate School librarian Kathy Ellison was notified that she was among 10 librarians nationwide who had been chosen for the Carnegie Corporation of New York/New York Times I Love My Librarian Award.

Other awardees came from a variety of library types, including universities, public libraries and schools. Ellison was surprised and thrilled to be among them. She humbly credits almost everyone but herself for this honor.

But the people whom Ellison touches in her daily life know better. Ellison is a remarkable educator. She was nominated by her colleague Ailene Isaf because of the multi-faceted and progressive environment Ellison has made of the Sakai library and, in many ways, the entire school.

Through curriculum development that interweaves history, science, contemporary culture and literature, Ellison has opened a stimulating and constantly evolving universe to Sakai students. Fifth-grader Rowan Drury summed up why she thought Kathy Ellison won the I Love My Librarian Award:

“I’ve been lucky to have great librarians at all my schools. But Ms. Ellison, she’s something special. She does books, comes to our classroom and leads the salmon project. She does everything!” The community outside the Sakai building clearly recognizes what a treasure Ellison is to the kids and adults alike.

Although the travel stipend Ellison received with the award was certainly welcomed, it was not enough to fully cover her trip to the award ceremony. So in stepped donors from the Bainbridge community. In almost no time, Ellison had enough funds and donated frequent flyer miles not only for herself, but also for her husband and 6-year-old son Andrew to travel to New York for this exciting event.

The ceremony itself, held at the Times Center in the heart of Times Square, left a nervous Ellison deeply touched. “It was really scary getting up and speaking in front of such an impressive group of people, but I got through it.

Dr. Vartan Gregorian, director of the Carnegie Foundation, spoke about libraries as ‘stations of hope’ for people. I certainly felt that way about libraries when I was growing up, so that quote resonated with me.” Ellison, whose own father had dyslexia, feels she inspires that hope every time she helps a struggling reader.

The role of a librarian in the second decade of the 21st century is a far cry from the prim, due-date-stamping, patron-shushing stereotype. And an intermediate school librarian is no exception, having to juggle the inventory, academic requirements, technology and regulations associated with contemporary information management, together with a student body that is starting to transition to adulthood, both physically and intellectually.

A critical part of Ellison’s role is as the school’s technology expert, teaching the students how to navigate the Internet to locate appropriate and reliable information. She approaches this task in a manner that is fun for the kids, while instilling in them the importance of critical thinking and Internet safety.

It is this kind of experiential, humor-based learning that Ellison uses to hook the kids and develop the intended skills in them. Ellison is renown among Sakai students for her ability to recommend the right book to the right kid.

To do this successfully, she gets to know as many students in the school as possible, engaging them in conversations about books they like or just observing what they gravitate toward when they come into the library. This trick requires Ellison to keep up with the enormous body of literature available for young readers. She subscribes to a number of book lists and blogs that announce new literature.

Ten-year-old Travis McCoy is one of Ellison’s greatest fans. “She makes the library a warm and inviting place,”  McCoy said. He visits the Sakai library and its cozy reading pit at least three times per week to satiate his enormous appetite for reading and to drink in the welcoming vibe that Ellison creates.

Kathy Ellison is open-minded about how kids should approach reading and research. Her goal is to get them passionate about it. Whether this is through books, e-books, magazines or websites, she wants to spark their curiosity and inspire them to learn. She thinks winning this award will give her the opportunity to push the envelope even further in how she approaches her role as a school librarian. 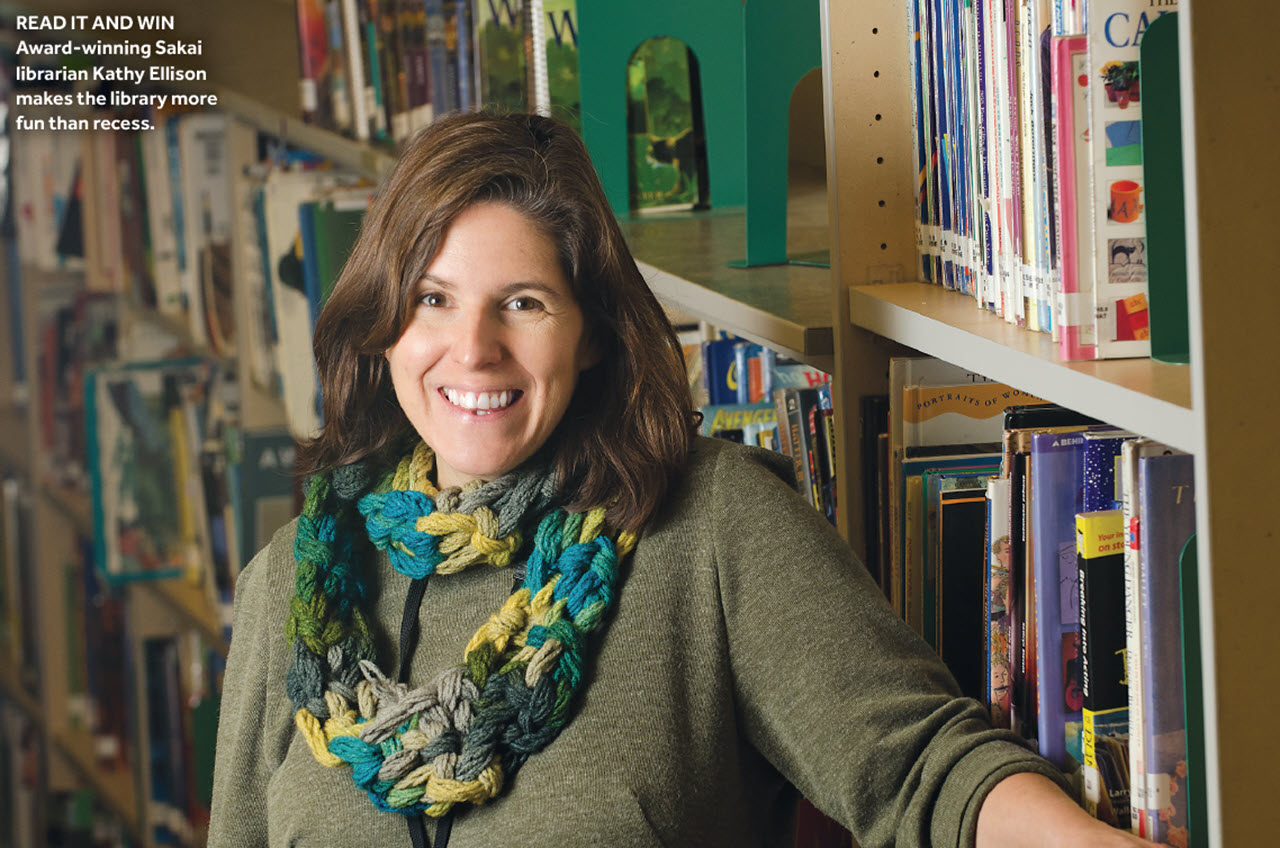