In Two Tall Douglas fir trees at Sacred Groves, the private land at the end of Holly Farm Lane, a grand adventure is taking place. For years scientists have climbed in the canopy as a means of researching the mysterious, hard-to reach habitat of the forest’s top layer. Professional arborists climb trees daily as part of the job and on the weekends for fun and competition. Now “canopy tree climbing” is a fast-growing recreational pursuit for young and old alike, thanks in part to AdventureTerra’s Canopy Tree Climbing eco-tour here on Bainbridge Island.

“Bainbridge is the perfect location for this adventure because it’s close enough to the city for people to get here and far enough away to have a feel of being completely in nature with big trees to climb,” said Leo Fischer, the 20-something co-founder of AdventureTerra and guide for this unique experience. We followed Fischer and fellow guide Brittany Hilborn into the canopy some 200 feet above the forest floor, fitted with harnesses, ropes and carabineers capable of supporting 8,000 pounds with redundancies for safety. Using a technique called “jumaring,” which was originally invented for rock climbing, climbers are taught how to move the jumars (more commonly called “ascenders”) swiftly up the rope with their hands, while simultaneously pressing one leg in a strap attached to the harness from a bent or sitting position into a straight or standing position.

It is a learned coordination technique similar to acquiring the ability to pat your head and rub your belly at the same time. With each coordinated movement, climbers inch closer to the treetops, pausing periodically to catch a breath or enjoy a soaring swing through the trees. Over the average 90-minute climb, tall cedars and lofty maples take on an odd resemblance to the short sword ferns on the forest floor below. When we reach the branches, we use arms and legs to pull us ever higher until the canopy opens, revealing a stunning bird’seye view of green, forested Bainbridge Island. Agate Pass shines silver as it winds its way between the puzzle pieces of shoreline, and the black, jagged Olympic Mountains stand out against a crimson sunset.

“Nothing can prepare you for the view from the top of the canopy. It’s quite different than standing on the summit of a peak, because you feel a part of it all,” remarked one climber after the experience. Like most of us, Fischer began climbing trees as a kid, but then turned to rock climbing in his teens.“ me climbing trees offers a unique perspective on nature that allows a deeper connection. When I climb trees, I feel like I’m going somewhere completely different, somewhere magical.” With his love for rock climbing and knowledge of the sport’s techniques, he cofounded AdventureTerra as a way to put himself through graduate school.

In the summer of 2014, AdventureTerra tested the idea of a canopy tree climbing adventure, choosing Bainbridge Island as a base of operations. The venture was a wild success with over 200 people joining a tour that first summer. Business was so brisk in fact that the waitlist overflowed to the opening of the 2015 climbing season. After three additional guides were hired, an average of 25 people per week have climbed the fir trees so far this year, including one mother from Seattle who planned her daughter’s Sweet 16 birthday party in the trees, complete with birthday cake.Part eco-tour and part adventure sport, canopy tree climbing offers a thrill of a singular kind—a unique encounter with the silent giants that stand among us. In more ways than one, it makes you feel like you’re on top of the world. 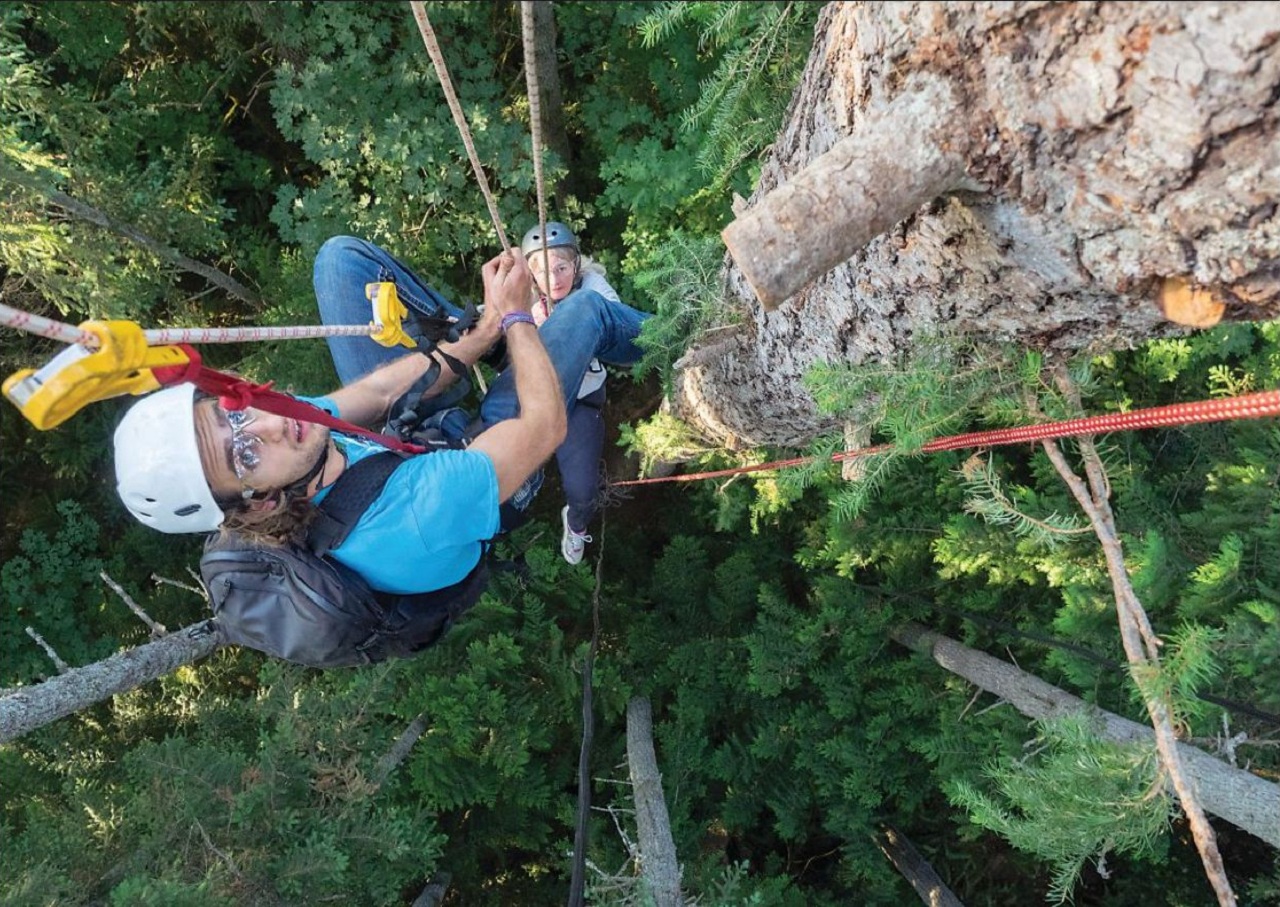