A Rowing machine might lead you to joining a crew team. Indoor cycling could have you thinking about tackling the Chilly Hilly. But going from a treadmill to summiting Mount Rainier? That’s training taken to new heights. Island Fitness co-owner and general manager Michael Rosenthal first climbed Mount Rainier in 2005. At age 52, Rosenthal was in good shape, with hiking and rock climbing experience; however, climbing mountains is another realm. “I climbed Rainier, but it wasn’t pretty,” said Rosenthal, an avid photographer who likes to record his endeavors. “I only managed 35 pictures and really learned what a climber faces.”

When local alpinist Garrett Madison, who was then guiding for Rainier Mountaineering, Inc., approached him with the idea of developing a mountaineering training program at his gym, Rosenthal was intrigued. In 2006 Rosenthal, along with input from Madison and a team of IF personal trainers, developed Train to Climb (TTC), an intensive, graduated six-month training program, open to all levels of climbers, that systematically prepares participants for a successful summit of Rainier. Each February, a new program begins. Working with personal trainers, members follow an incremental strength-building and cardio program, culminating (for the first eight participants to register) with a Mount Rainier climb guided by Seattlebased Alpine Ascents International (AAI) slated to coincide with the Perseid meteor shower every August.

“We do everything we possibly can to get you to the top of that mountain,” said lead trainer Loretta Stanton, who climbed Rainier herself in 2010. “We address proper body mechanics, strength and conditioning preparation, as well as equipment and nutritional needs.” Climbing mountains is not cheap, and TTC leaders also provide resources for rental and used equipment to help mitigate costs. (The TTC program itself costs roughly $2,500. Gear and the AAI guided climbs are separate.)

While workouts are largely individualized, much of TTC’s success lies in its group dynamic. Each year’s crew meets monthly to share progress reports, try various food, hydration and equipment options, ask questions, and provide each other valuable moral support. Closer to the actual climb, TTC members take weekly hikes, including a Mount Adams climb four to six weeks prior to Rainier, where they can experience steep conditions and altitude changes. “Mountain climbing can be intimidating, and many people are hesitant to try,” said Gordon Janow, director of programs for AAI. “TTC offers people a unique resource to enter into it with confidence.”

Like many ferry riders, Jim Cachules, a Chicago native who moved to Bainbridge in 2006, was mesmerized by Rainier, wondering if someday he might climb it. Bainbridge acquaintances Scott Thomas and Robin Houck had similar thoughts, and in 2010 the three decided to realize their goal. TTC seemed the perfect mechanism. “You don’t have to do TTC to climb Rainier,” Cachules said, “but it does greatly enhance your chances of success.” Cachules’ group, which also included Rosenthal and Stanton, had a banner year, with perfect weather for both the Adams and the Rainier climbs. The experience solidified the friendship between Cachules, Thomas and Houck; the trio has continued to summit a mountain every year. Their most recent conquest was Mount Olympus this past July.

One of TTC’s signature workouts is for participants to walk on a 30 percent inclined treadmill with increasingly heavy packs. Invaluable to TTC participants, the steeply angled treadmill also can be an effective marketing tool to potential climbers. After years of watching people toiling on that treadmill, Eileen Hershberg finally decided 2015 was her year. “TTC is as much about training your mind as your body,” said Hershberg, who had never attempted a physical goal so challenging. Though she struggled with a 15-pound pack during her first hike at Gazzam Lake, four months later Hershberg, with a much heavier load, was the sole woman in a TTC group attempting Rainier.

Severe weather prevented their summiting; regardless, Hershberg, at 5 foot, 3 inches and 110 pounds, is proud of her accomplishment. She braved brutal temperatures and high winds, learning the essential climber lesson of knowing when to turn around. Plus, she’s back at it for 2016. Rosenthal, too, continues to climb, having summited Rainier seven times since 2005. Now, however, he too trains with TTC. And these days he averages at least 500 pictures per climb. 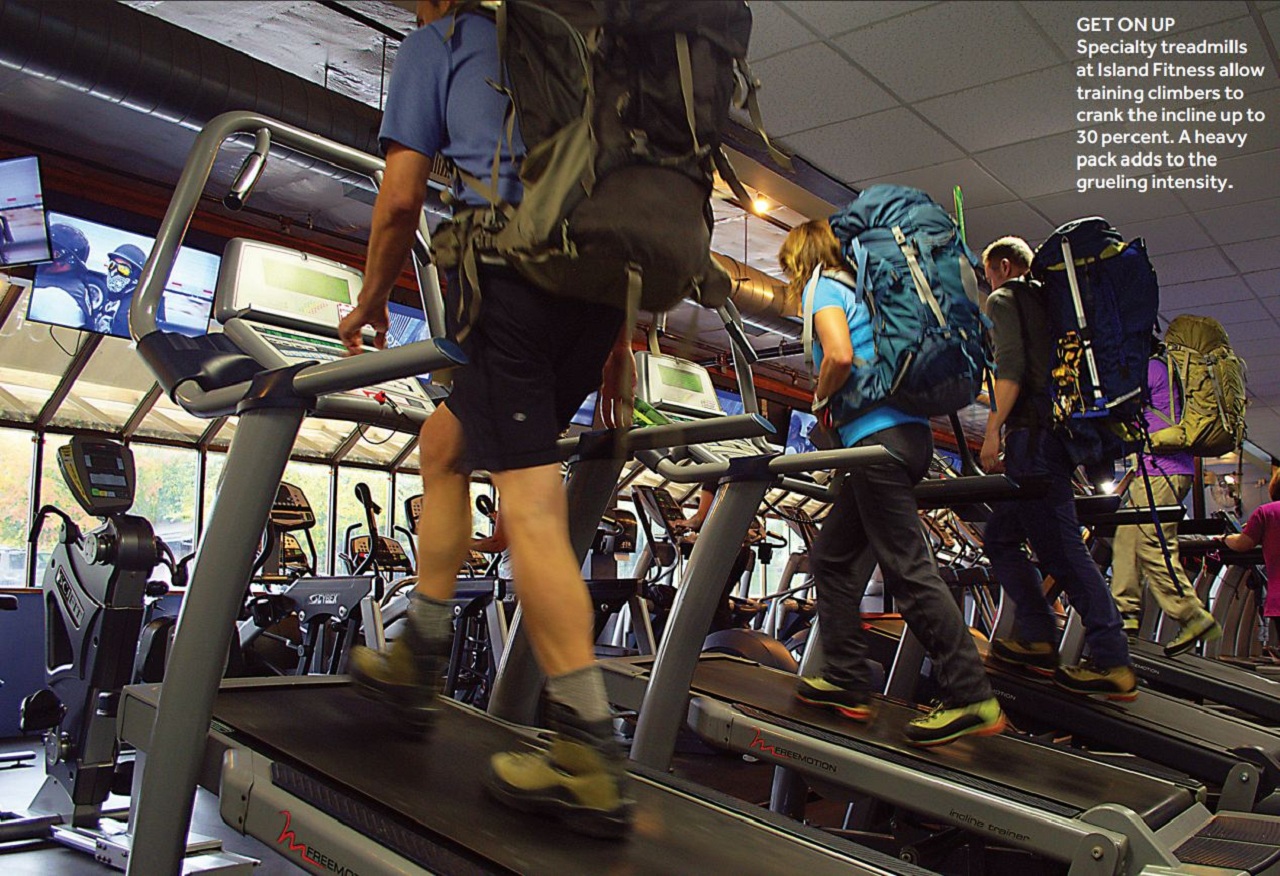