Julian Wood, 24, knew that when he graduated from high school it would be tough to find work. Not only was employment scarce at the time, but he’s nonverbal and on the autism spectrum—who was going to hire him? A graduate of Bainbridge Island School District’s Adult Living Program (ALP), which supports students with disabilities from age 18 to 21, Julian had worked closely with Barb Brewis, the recently retired coordinator of the program. She noticed that he had a remarkable memory for numbers and, when she tested his typing and 100-key skills, she was surprised to find his accuracy near 100 percent.

“Because Julian is nonverbal, I think a lot of people might have assumed that menial labor would be the best fit for him,” said Deanna Wentz, employment service manager at Vadis, one of the agencies that partners with BISD to find local employment for adult students with disabilities. Instead, she and Brewis worked with the Kids Discovery Museum (KiDiMu) to establish a volunteer position for Julian doing data entry. It wasn’t long before his spreadsheets became critical to the museum’s grant writing success and he progressed from volunteer, to grant supported employee, to permanent employee in two years.

KiDiMu executive director, Susie Burdick, sang his praises: “Julian’s wonderful and we all adore him. He does great work.” Of course, for any graduate there’s anxiety surrounding that next step to employment. But for students with disabilities, it’s an even more precipitous leap as the safety nets begin to fall away. The ALP was designed to help bridge that gap. When the idea was first proposed in 2003, Brewis advocated for a place off school property, “a satellite campus,” for those who had completed high school. Now based in a cozy apartment at the Eagle’s Nest on Madison, ALP lets students get experience running a household and looking for work in an authentic setting. “We prepare them for the most independence possible,” Brewis said.

Current ALP coordinator, Teresa Saunders, continues that mission. A typical day for one of her students, Scott Mowell, 20, includes tasks like creating a grocery list, food shopping, making lunch and cleaning up. His life skills practice is interspersed with a demanding work schedule—he’s holding down three part-time volunteer jobs. His year-end goal is to secure a paid position. “Scott’s employers put a lot of thought into his interests and his abilities,” Saunders said, giving a nod to the island’s business and nonprofit community. “Everyone’s got open arms and a willingness to work with our people.”

Geography and local culture play a role. “Bainbridge Island is a tight community with a small-town feel; that’s one of the reasons that transition services on the island work extremely well,” said Kelly O’Neal, the Kitsap County disabilities coordinator. Joanne Nickel agrees. She remembers when her daughter, Rebecca, 31, went through the ALP. “Barb Brewis considered volunteering the starting point—a way for students to try on different hats. Rebecca started with a position at Helpline House.” With some experience under her belt, Rebecca was able to secure longterm employment, most recently at Liberty Shores Senior Living in Poulsbo, doing food preparation. “She’s always been a great cook,” her mom said.

Once a month, Rebecca makes her way over to the Eagle’s Nest apartment where People First, a selfadvocacy peer group meets. Tanner Conrad, 37 (whom you might recognize as the cheerful McDonald’s employee), is co president of the island’s chapter and moves around the room making everyone feel at home. Brewis is also there, offering encouragement to the attendees, many of them her former students. On this evening, representatives from Owen’s Playground have presented the group with a thank you card and friendship bracelets.

Over the summer, People First helped raise $3,260 for the local playground designed to provide play opportunities for kids of all abilities. “It’s a great cause,” Conrad said. There’s a palpable feeling of confidence in the room, as if all things are possible when a balance is struck between personal independence and community support. The meeting ends promptly at 8 p.m. It’s a weeknight and, thanks to the program, as well as advocates like Brewis and Saunders, these folks have to get up and get to work in the morning. 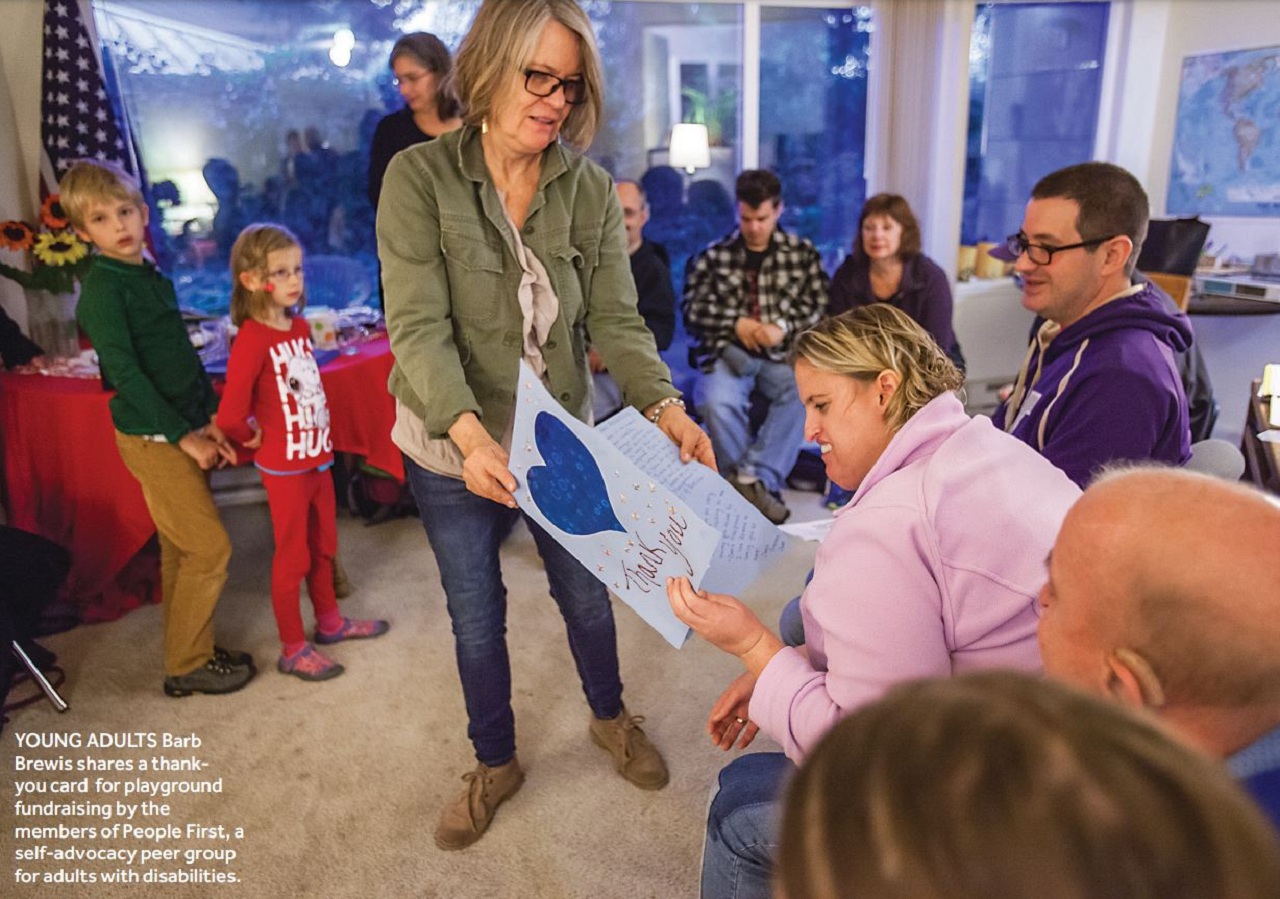