Jas Linford is referred to by his wife, MJ, as “Mr. Music” and the nickname is well earned. In addition to being the island’s foremost authority on the tuba, he buys, sells and repairs instruments of all kinds; teaches music; conducts the Hometown Band of Kitsap County; and plays in the Bethany Brass, Farragut Brass Band and Bainbridge Orchestra. When not providing the low notes for performances around the island and beyond, he’s likely found at Jas Linford’s Brassworks, a veritable Santa’s workshop of instruments and parts hidden in the woods just off North Madison Avenue.

In the fifth grade, I wanted to learn saxophone because I wanted to play big band, but Mr. Peterson, the band director, saw me and said, “Hey, get inside that.” “That” was a sousaphone. I’ve been playing tuba and sousaphone ever since.

You moved around a lot as a kid. Was band a lifeline?

I went to three different high schools in three different states and played in the marching band in each one. At all of the different schools, the only people I really knew were the band people. If you’re a good tuba player, you always have a job.

How did you get into instrument repair?

I’ve always been doing repair. My father would lend me tools and if I broke one and couldn’t fix it I had to buy him a new one. I learned how to fix drills and electrical things from him and how to care for things. Still, I bought him a lot of tools!

What is the first instrument you worked on?

My mom bought me a tuba at the Salvation Army for six bucks. I still have it, too. That was the first tuba that I owned. It was beat up. The bell was flat from people stomping on it and the bow was crushed from being hung on a hook for eons. I used a torch to take it apart and pushed the dents out. Later, I decided that I had better learn how to do it right.

How did you start getting customers?

It’s always been word-of-mouth. You fix one guy’s instrument and they tell all their buddies. Now I fix instruments for the Bainbridge Symphony, the Bremerton Symphony and a couple of schools. That pile over there is all from Sakai. You know little fifth and sixth graders, they can beat up an instrument.

Are you working on anything interesting right now?

I work on my own personal whacko things once in a while. This is part of a rotary valve trombone. [Shows me a weird looking instrument part.] Here’s the rest of it. There was something living in here at one time. I think it was an animal.

Good German Oktoberfest music. Not what they play in Germany now, because they play rock music now, but Ernst Mosch and a lot of the different Czech bands. They’re playing really nice, tight harmony, usually with rotary valve flügelhorns.

What do you enjoy most about repairing instruments?

I love fixing things and getting to see the kids’ faces when they get an instrument they can start to play or they can play again.

What’s the most frustrating thing? 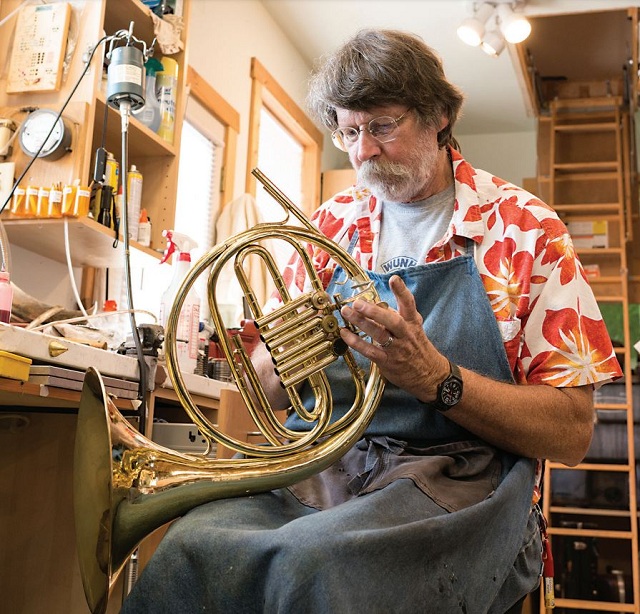