Bruce Barcott has had a career in journalism that would give any adventure lover a natural high. A 2009 Guggenheim Fellow in nonfiction, Barcott has authored works including The Last Flight of the Scarlet Macaw, named one of Library Journal’s Best Books of 2008, and The Measure of a Mountain: Beauty and Terror on Mount Rainier. His environmentally focused articles appear in Rolling Stone, Outside, OnEarth, National Geographic and The New York Times Magazine. He is currently at work on a book about marijuana legalization in America.

How did you get from the majesty of Mount Rainier and exotic bird extinction to legal weed?

I was not initially passionate about I-502 [the state initiative to reform marijuana laws]. I was thinking I’d vote no; I’d tried it in college but abandoned it soon after. As an adult and a father, I didn’t want to deal with it. A friend helped me understand that it’s really a social justice issue; thousands of people are going to jail and prison over this. Once it passed, I saw that so few journalists were working on the story. Nobody wants to be seen as the stoner reporter.

The two states that are taking the lead in legalizing marijuana are Colorado and Washington. You’ve lived in both. Coincidence?

[Laughs] It was a coincidence, but once both states passed laws, I realized I have contacts and experience in both places and I could write about history as it was happening. Because I came from the generation raised on programs like DARE and Just Say No, the idea that marijuana could be legal and sold over the counter was astonishing.

Islanders are dying to know: will there be a pot shop in my backyard?

The issue has been settled, at least for the next couple of years: no retail or grow on the island. Technically it’s possible, but it ends up being a tiny geographical slice of the island, so it’s not going to happen. But Bainbridge will be in my book, because it’s a good example of what towns all around the state are going through.

Your fellow journalist Maureen Dowd wrote a pretty scary story about her “trip” to Colorado. Where has your research taken you?

Right when those first “overdose” incidents happened, a company in Denver that makes edibles stepped up with lower-dose products. For example, 10 mg THC per package is the maximum; now they have a soda that’s infused with 5 mg. I tried one and it was like drinking a beer. No more work for the next hour. But then it wore off.

Does this make you the coolest suburban dad ever, or are you still the source of your daughter’s eye roll?

She thinks it’s hilarious. Claire [Dederer, Barcott’s wife] wrote a piece on sex for The Atlantic, so I think our kids are embarrassment-proof at this point. 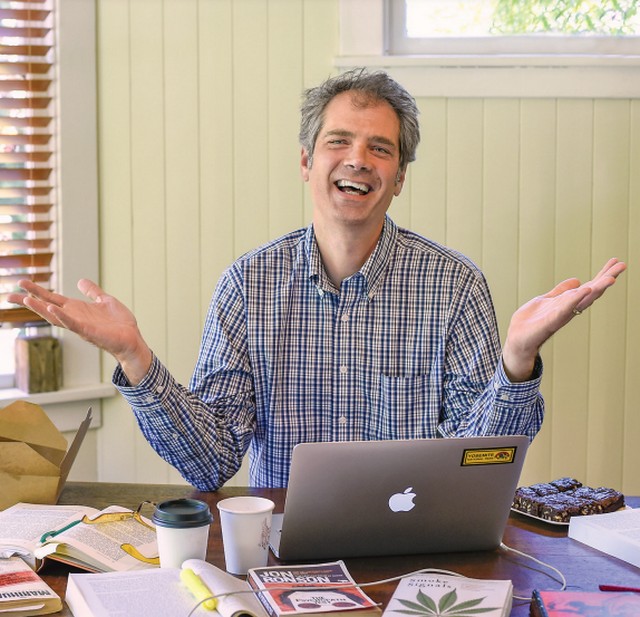