From the solar panels on their roof, to the Nissan Leaf in their driveway, to the fair trade coffee company they founded, it’s easy to get a sense for the type of people that Kelsey and Stacy Marshall are. They do the right thing because it’s the right thing to do.

So it comes as no surprise that the Marshalls are now working to build an all-inclusive playground on Bainbridge Island. While the inspiration behind their efforts came from the loss of their 6 year-old son Owen due to complications from cerebral palsy, the couple see this playground as far more than a tribute.

They see it as a place for our youngest residents to fully participate in the most important occupation of childhood: play. Set to break ground in September on a site at Rotary Park, Owen’s Playground will be a place where the play experience will not discriminate or segregate everyone can participate to the best of their ability, and have tons of fun doing it.

“It’s really about quality play for everybody. It’s the evolution of the playground,” Kelsey said. “If you could make a great playground that everyone could play on, why wouldn’t you do it?” Accessibility affects not only kids with challenges, but also their siblings and caregivers.

For example, if a parent has to sit on the perimeter because the playground is inaccessible, they are isolated and often don’t have a sightline to their other child. In the end, they might simply  ake going to the playground off the list.

“It was so heartbreaking to sit on the sidelines of play,” Stacy said, recalling memories of trying to go to traditional playgrounds with Owen and his younger brother, Elliot. Especially heartbreaking for the Marshalls, a family that embodies the word “outdoorsy.”

“We consider ourselves to be playful people. We are always out hiking, cycling and cross-country skiing,” Stacy  said. By building the playground, which will be replete with natural elements like stones, sand and water, “you are bringing beaches, back country trails and streams into a park environment and making them accessible to people who couldn’t do that otherwise,” Stacy said.

Elements like a zipline, an extra-wide slide and a spinner with adaptable seating sound like fun for everyone, ensuring that accessibility won’t hamper playability. And by building the playground at grade, those in wheelchairs can really get in the middle of the action.

“Owen loved the sound of kids laughing and singing, but being on the perimeter didn’t allow him to have access to that joy,” Stacy recalled. Caregivers also won’t be left out in the rain, literally they can survey the scene from covered structures that are centrally located.

“It’s really the better playground for everyone,” Kelsey said. Of course, a dream playground like this one doesn’t come for free. The seed money for the project was raised through donations to a memorial fund and from the Bainbridge Island Parks Foundation.

The project is also supported by Rotary. Beyond that, fundraising is ongoing, and donor opportunities under consideration include named sponsorships of equipment and the sale of a coloring book illustrating the benefits of this type of playground.

Those benefits for kids, families and communities cannot be underestimated. Stacy put it best: “When we are young, so much of life happens on the playground—the navigation of difference, conflict, how we collaborate. Who we see on the playground forms our opinion of who is included in our community.” Hopefully, through Owen’s Playground, everyone will be. For more information or to make a donation, go to owensplayground.org or facebook.com/owensplayground. 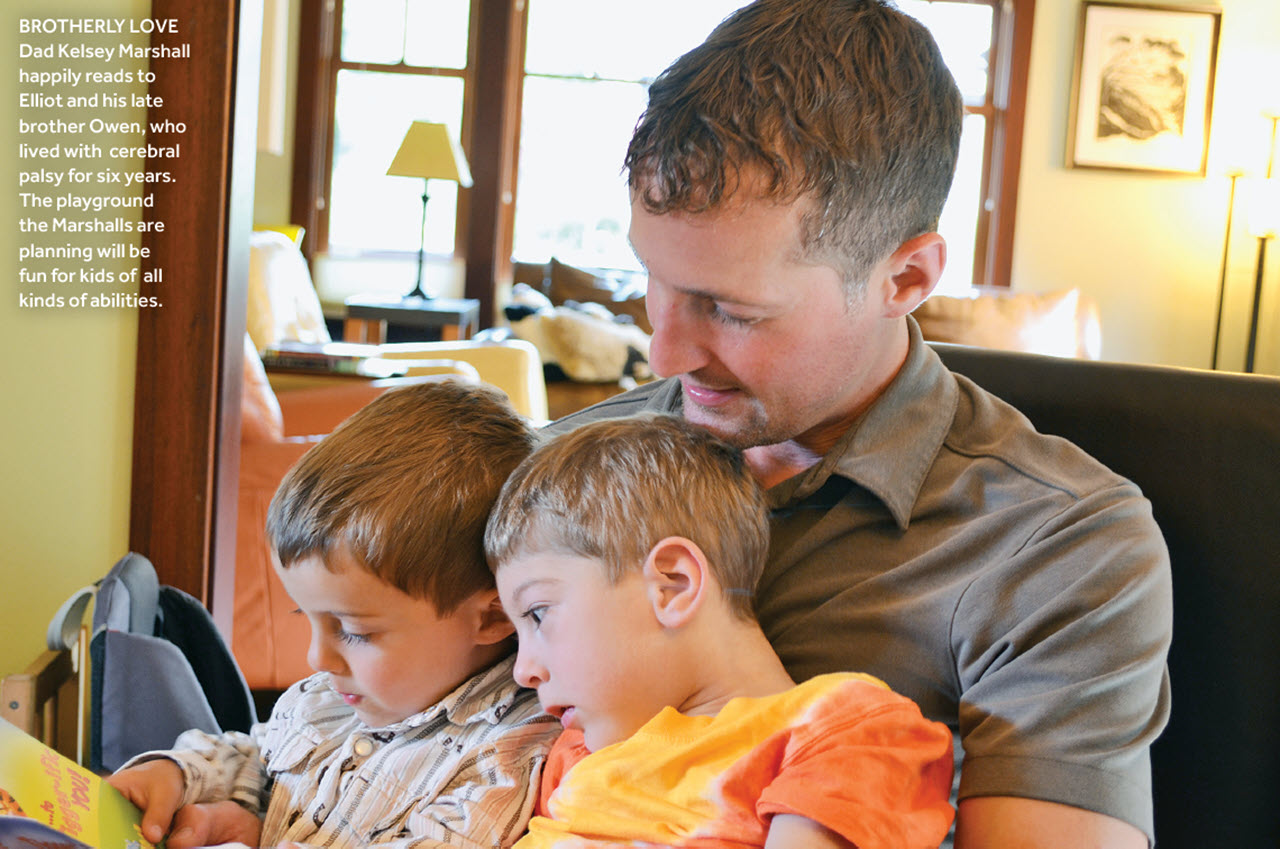