Rock and Row // Bainbridge Island Pulls Together on the Water

It’s no surprise that the theme of the Bainbridge Island Rowing club’s annual auction is “Dream Big.” There’s a lot about rowing that’s big. For starters: its popularity.

When Bruce Beall, BIR’s director of rowing, started coaching the junior boys team just five years ago, he had just seven boys under his wing. By last year, that number had grown to 36. And last year’s girls team numbered a whopping 76. To boot, more than 100 adults row with BIR, some recreationally, some competitively, ranging in age from their 20s to their 80s. On Bainbridge, BIR is the only way to row; high schoolers who want to row for BHS do it as a club sport through BIR.

When Beall started attending the University of Washington in the 1970s, he didn’t know a lot about the sport. But at the start of his freshman year, all male UW students over six feet tall received a recruitment letter from the rowing team encouraging them to try out. Good thing Beall did. He made it big, serving as the stroke (lead rower) for the varsity boat and eventually competing in the 1986 Olympics. When asked why the sport appeals to him, Beall cited the camaraderie and the physical intensity. “It’s not a sport of the individual,” he said. “You’re only as good as the sum of your parts.”

Northwest native Sigrid Knight, 79, has been rowing with BIR at 4:45 a.m. for almost 10 years. “I love the total body workout, and the friendships, too. Being on the water early in the morning is actually kind of spiritual.” At the other end of the age spectrum is novice rower Ellie Gengkinger, 14, who started rowing over the summer on the recommendation of her mother’s boss. It’s rare for a teenager to want to wake up at 6 a.m. during summer vacation. But Gengkinger doesn’t mind one bit. “It’s one thing when you have to wake up early for school. But when you have to wake up for rowing, it’s great!”

Gengkinger has been an equestrian rider since she was young, never really getting into team sports. But she’s finding rowing to have great payoffs, including friendships. She’s been attending the Odyssey Multiage Program on Bainbridge and will be entering Bainbridge High School in the fall. She said that rowing will make it easier to transition into the high school because she will know a lot of people from BIR.

As documented in Daniel James Brown’s bestselling book, The Boys in the Boat, rowing is a long-standing tradition in the Pacific Northwest. Some say it’s the magical draw of the water. Others say it is part of the pioneer spirit rooted in surviving life in this once-isolated corner of the country. Whatever the source of the attraction may be, it is big. It’s so big, in fact, that Kitsap Regional Library’s One Book, One Community programming staff unanimously chose The Boys in the Boat as this year’s selection. In October, KRL will sponsor a reading by the author, as well as an appearance at the Bainbridge library by Judy Rantz Wilman and Kris Day, daughters of two rowers featured in the book.

KRL programming lead Chapple Langemack began rowing with BIR a year ago. She attributes her inspiration to row to 2008 Olympic gold medal winner Anna Cummins. Cummins will be speaking at the Poulsbo library on Oct. 14 as part of the One Book, One Community events.

BIR has one more big plan in its near future: to build a proper boathouse. The team’s current home base is a tennis court with a small sheltered area in a corner of Waterfront Park, their daily launching point. But with such a big program now, which includes many boats bearing the name of the famous crew shell builder George Pocock, BIR is ready to have a formal structure and home base. They plan to kick off their $2 million fundraising campaign at this year’s BIR Dream Big auction on November 8. The big dream is to build a boathouse that not only will store their rowing equipment, but also will be a gathering place for the BIR community to build skills, camaraderie and a sense of belonging.

For more information, go to bainbridgerowing.org 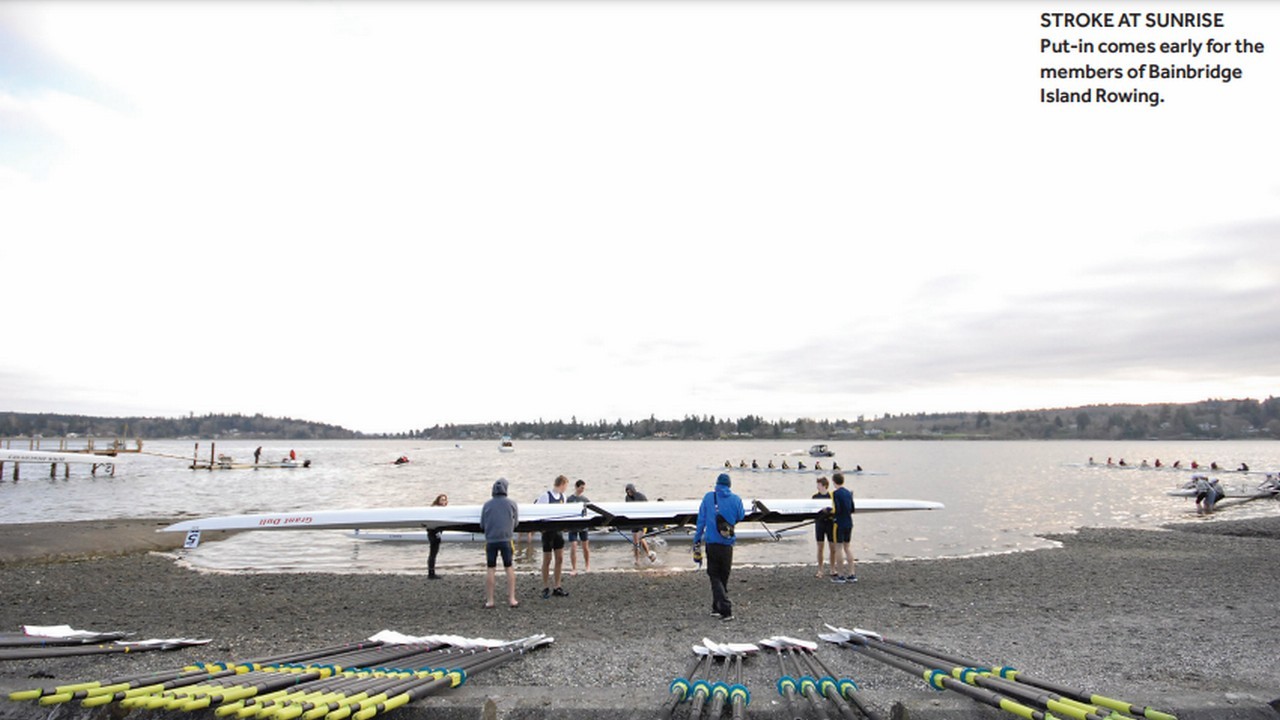