Out of Africa // The Kingombes Hope the Journey Ends Here

This spring there was a traditional wedding on Bainbridge Island—but that may not mean what you think. On that joyous day, parents of the bride and current island residents, Kims Kingombe Embeya and Henriette Mbutshu Wemanonge, followed the customs of their native Democratic Republic of Congo.

The young couple, Ludy and Jean, met in 2009 in a hospital in the DRC. She was a nursing student, he was a doctor. Three years later their paths crossed again in Federal Way, Washington. Only after accepting a proposal from Jean and a lengthy correspondence with his family to settle on the gifts they would receive on the wedding day did the Kingombes present Ludy, the eldest of their seven children, to the groom.

At the wedding, the youngest, 5-month-old Anoint, surveyed the scene from assorted laps, blissfully unaware just how far her family had come. In the DRC, Kingombe owned a trucking company and transported fuel. Threats to the region and its rich resources were constant.

“We didn’t have a stable government. We didn’t have security as Congolese people,” Kingombe said. “You could lose your business in one day.” Indeed, rebels targeted his family and took his truck to strike another village.

Kingombe sought safety in America. Granted political asylum in 2005, he initially had to come alone. Kingombe made his way to a shared apartment in an immigrant community near Federal Way, learned English his sixth language and began working to reunite his family.

He opened Kims Cleaning. By day he fueled airplanes, by night he cleaned offices. “Kims used to send money home for the kids’ school, for food everything we had was from him,” his wife said. When the remaining visas were finally approved in 2012, Kingombe had just three weeks to sell his cleaning equipment to afford the family’s airfare.

Twenty-two-year-old Ludy, 15-year-old Glodi and 14-year-old Jospin arrived in September of that year. In October, Henriette followed with 12-year-old twins Marie and Christian, and 8-year-old Maradie. A woman who runs a Christian relief organization helped them acquire a tiny two-bedroom apartment.

She also introduced the Kingombes to her niece who was adopting two Congolese children. It was at a party held by the niece that the Kingombes met a miracle in the form of a Bainbridge Islander. “When I first met Kims and Henriette, she was pregnant,” the woman, who wishes to remain anonymous, recalled.

“Kims started introducing his children and there was so much beautiful respect from the kids. I had to know more.” Kingombe described the agony and the ecstasy of his situation. He was elated to finally be reunited with his family, but at the same time deeply concerned about how he would provide for them after selling his business and losing his second job.

“Well, God, it’s pretty obvious why I’m here,” the woman from Bainbridge thought, after hearing his story. She first offered Kingombe work on her Bainbridge Island farm. After visiting baby Anoint in the family’s cramped quarters, she realized they needed to live in a tranquil, safe place with great schools what better place than the farm itself?

And since she left every winter, there was plenty of room. “It’s hard to explain the kind of heart they have,” Kingombe said of his sponsors. “You don’t see them only God. “I love living on Bainbridge Island,” he said. “There is no discrimination.

Neighbors stop by and are genuinely interested in how we are doing.” The children are adjusting well. Now 10, Maradie feels they are the “cool kids” at school. Christian plans to study law, and his twin, Marie, wants to be a doctor.

“I miss my relatives and best friend in the Congo, but I think I will have a better life here,” Marie said. “One day I dreamt I went back to the Congo to build schools and help people who live outdoors get houses.”

A permanent place to live is what the Kingombes now seek, and a job for Kims—both on Bainbridge Island. “They deserve this beautiful community,” said their sponsor, whose extended family comes to live with her on the farm in the summer.

“And I think the community needs them.” Ludy didn’t leave the wedding reception with her new husband. Instead, his family granted the Kingombes’ request to keep her a few more days. After so many years apart, every moment together on this island sanctuary matters. 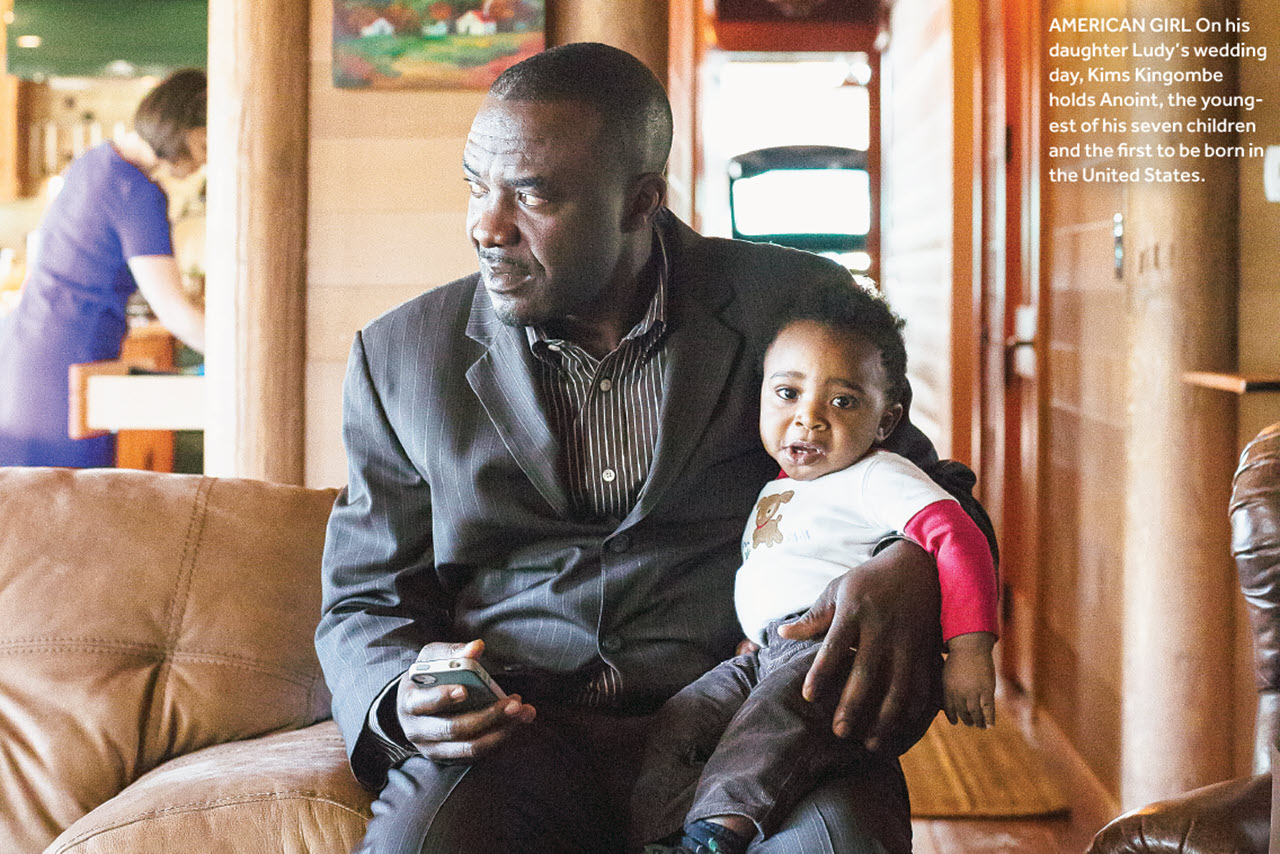 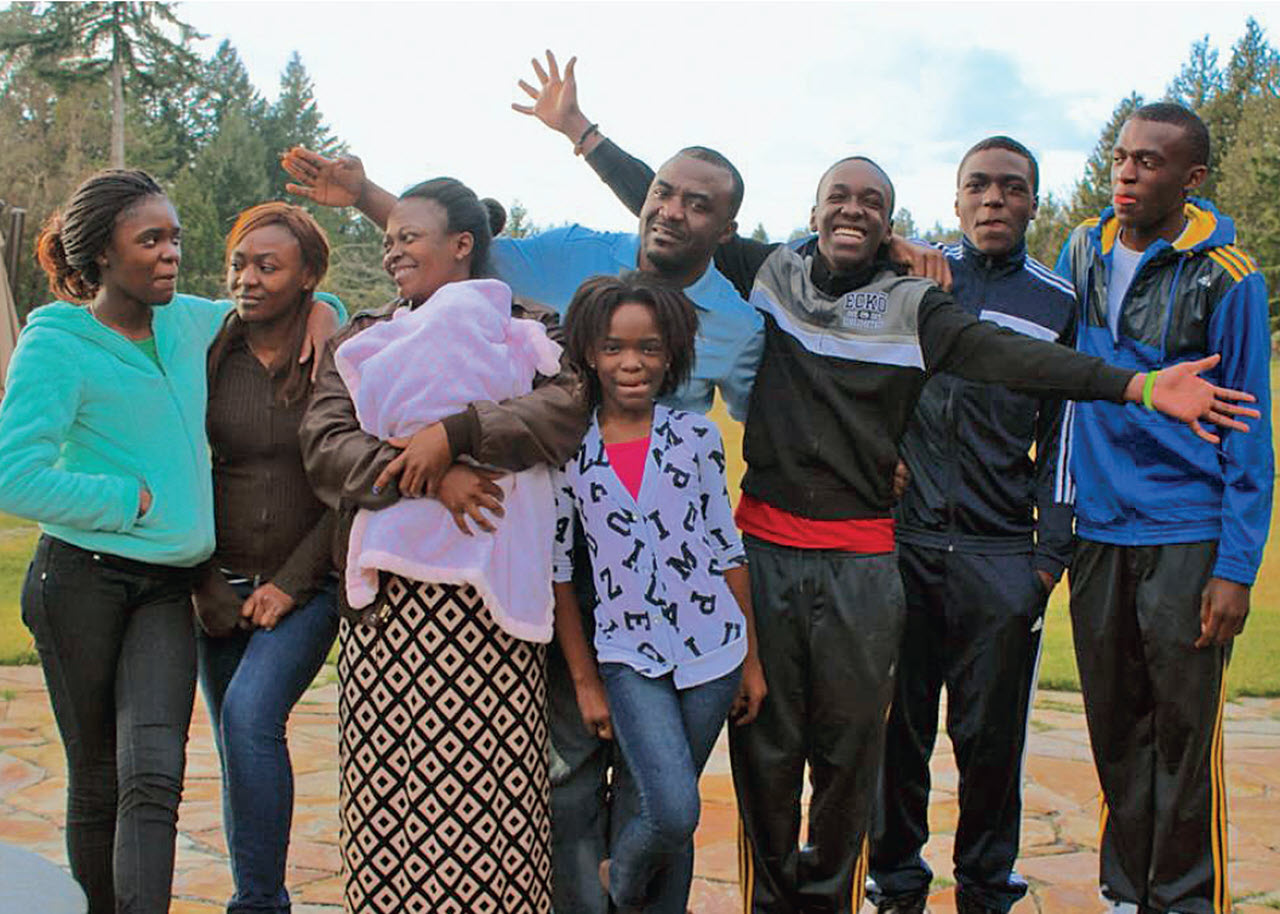