Education is the tool that can lift up a single soul and an entire community simultaneously. Educational Empowerment, a new and ambitious nonprofit based on Bainbridge Island, takes this belief one leap further: its goal is to empower an entire country through improved access to education.

And it all starts with “The Cat in the Hat.”

First, some background. Educational Empowerment (EE) is the effort of three islanders—Melody Mociulski, Sandy Schubach and Laurie Miller—who want to make literature accessible to children and families in a country most of us couldn’t find on a map: Myanmar.

Myanmar (also known as Burma) is located in Southeast Asia. Rich in resources but woefully underdeveloped economically, Myanmar has one of the worst health care systems in the world, and has been on the United Nations’ radar for human rights violations, including genocide, human trafficking, child labor and oppression of free speech.

With so many challenges, why would picture books make a difference?

“Many of these children have never seen a book,” Mociulski said. “Before 1998, there were little kiosks on city street corners where people could borrow books. Reading was an active part of family life. Then the poorer people were pushed out into the countryside where there were no kiosks. People are forced to bike or walk a long way into the city to work, so education has taken a back seat. The children need to learn the joy of active reading, teachers need to be educated to teach the kids how to read, and parents need to be encouraged to get their kids to libraries.”

All three founders are dedicated social activists who met while working with other local nonprofits. Mociulski was Southeast Asia Program Director for Clear Path International, and it was during her trips to Myanmar that the Burmese stole her heart.

“They’ve suffered so much, yet are so resilient. They try to be so positive, they live in the moment and they have such joy. When I would talk to my friends about Myanmar, they would invariably ask ‘where’s that?’ so I decided it was important to me to raise awareness here. It’s so closed off over there, and I want to help open it up.”

Mociulski and Sandy Schubach met while Schubach was filming in Southeast Asia for Clear Path International. Schubach also fell in love with the people of the area and was eager to help improve the chances of younger Burmese.

“The people have such a wonderful, caring energy,” Schubach said. “The first time I went, I met a Burmese refugee who had fled to Thailand for an education. He was the nicest young man, so I came home and raised enough money for him to get his degree. He’s going to get his bachelor’s degree in public health and return to Myanmar to help improve the poor health care system.

“The people there truly do believe in giving back,” Schubach said. “By giving people an education, you’re giving them a toolkit that keeps helping them.”

Shipping books is costly, so EE came up with an innovative idea: teach the Burmese to publish their own books for about a dollar each. By partnering with monastic schools in Burma, EE helps locals write down and illustrate folk tales, then distributes them to their other partner schools—including Bainbridge’s own Hyla Middle School.

“We bring the books back to Hyla, so that students here can read the same folktales,” Mociulski said. The books serve as a catalyst to raise awareness about this little-known corner of the world. “The social studies teacher can incorporate lessons about the country to help the students appreciate the culture and stories even more,” Mociulski said. The plan is to have the children at Hyla—and eventually other island schools—write and illustrate books that can be shared with the children of Myanmar.

When asked the raison d’être for Educational Empowerment, Laurie Miller makes it clear: “Those of us who are lucky enough to enjoy so many privileges need to give back using our skill sets. We need to support the communities in the world that are working so hard to educate their children. Because kids really are the future.”

For more information go to educationalempowerment.org 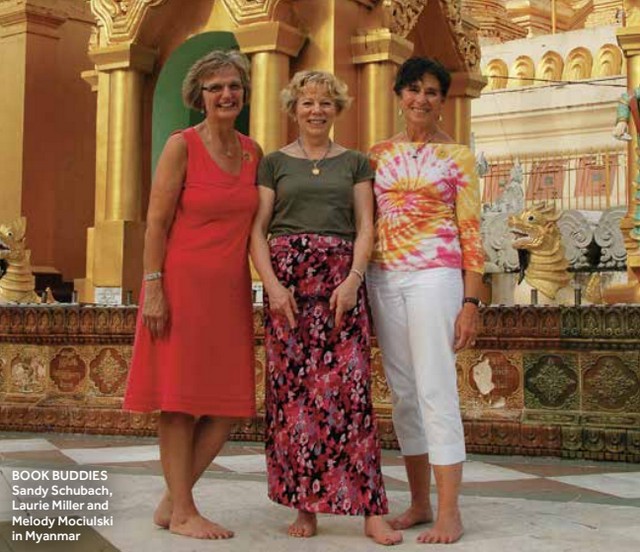