Three mornings a week, rain or shine, there’s a parade somewhere onBainbridge Island. Between 30 and 40 men and women stream by, sporting weather-appropriate, reflective gear, carrying the occasional walking stick or leash, their steps quick and their tongues wagging.

These are the Bainbridge Striders, and in their 18-year existence, they’ve become a familiar sight on their 35 different routes. Their formula is simple: meet somewhere on the island at 8:30 a.m. on Monday, Wednesday and Friday, gather in a circle for a few laughs and a quick introduction, then light out for a brisk three- to five-mile walk.

There are no dues, no meetings, and no real organizational structure. One person keeps a roster and another maintains a website listing the starting places for the walks. Then a lot of enthusiastic bodies show up.

The Striders formed in 1997 from an exercise group started by former islander Kay Jensen, a well-loved yoga and fitness instructor. “When Kay stopped teaching that class after a few years, we continued,” said Susan Bottles, one of the original members who is still going strong. For some time, the Striders roster remained fewer than 20.

“For many years we didn’t really expand that much,” she said. I think what happened was most of us reached retirement age, and at that point, husbands and other friends started to retire, and it started to grow.” Bottles estimates that most of the members are in their 60s and 70s.

But if you think that they’re slowing down, you would be wrong. “It’s self selective on speed and on personality,” Bottles said. “We’re not necessarily super fast, but we’re not slow. We do find that people will come and sometimes find it’s too fast, especially when we have a lot of hills. The Bill Point walk, which we call Zig-Zag, weeds out a lot of people. I also think there’s a certain personality that just fits in.”

For Bottles and her friend Joan Gardiner, who moved to the island in 1997, the Striders was a way to explore the island and meet new people. Now, it’s a cohesive, close-knit group. “We’re each other’s therapists,” said Gardiner of Bottles.

“We know everything about each other.” Gardiner even investigated whether there was a striding group on the island before she moved here. “I don’t go to church; this is my religion,” she confided. “I’m outside, communing.”

Although many long-term friendships have developed and people usually walk with folks they know, it’s not difficult for a newbie to show up and find someone to walk and talk with. On the day we visited, that newbie was Mary Anderson, a Bainbridge Island native who moved back to the island two years ago from Seattle.

As she said, “A fixed schedule of vigorous walking outdoors on uneven ground in all weather is not for everyone. You quickly find that out.” But her doctor stresses that it’s one of the healthiest things she can do, and she and her husband have become regulars.

Early on, the group established an annual weekend trip they call a “foray.” For the past several years it’s been held in Mazama, and it’s a popular chance to explore different terrain and barbecue together. So is it a social group, or a walking group?

As Bottles said, “We’re certainly a talking group with a walking problem! If I go to Striders, I don’t need to talk to anyone else the rest of the day!” As the years pass, health challenges have arisen, including some that happened on walks. One man suffered cardiac arrest in the Grand Forest.

Luckily some of the members knew CPR and kept him alive until paramedics could find them and transport the man to Harborview. Today, he’s still walking with the group. “The Grand Forest has taken down many of us,” laughed Bottles, recounting this story. “I guess only one, maybe two broken wrists.” But for the core group of Striders, it will take more than a broken bone or a heart attack to keep them from their passion. 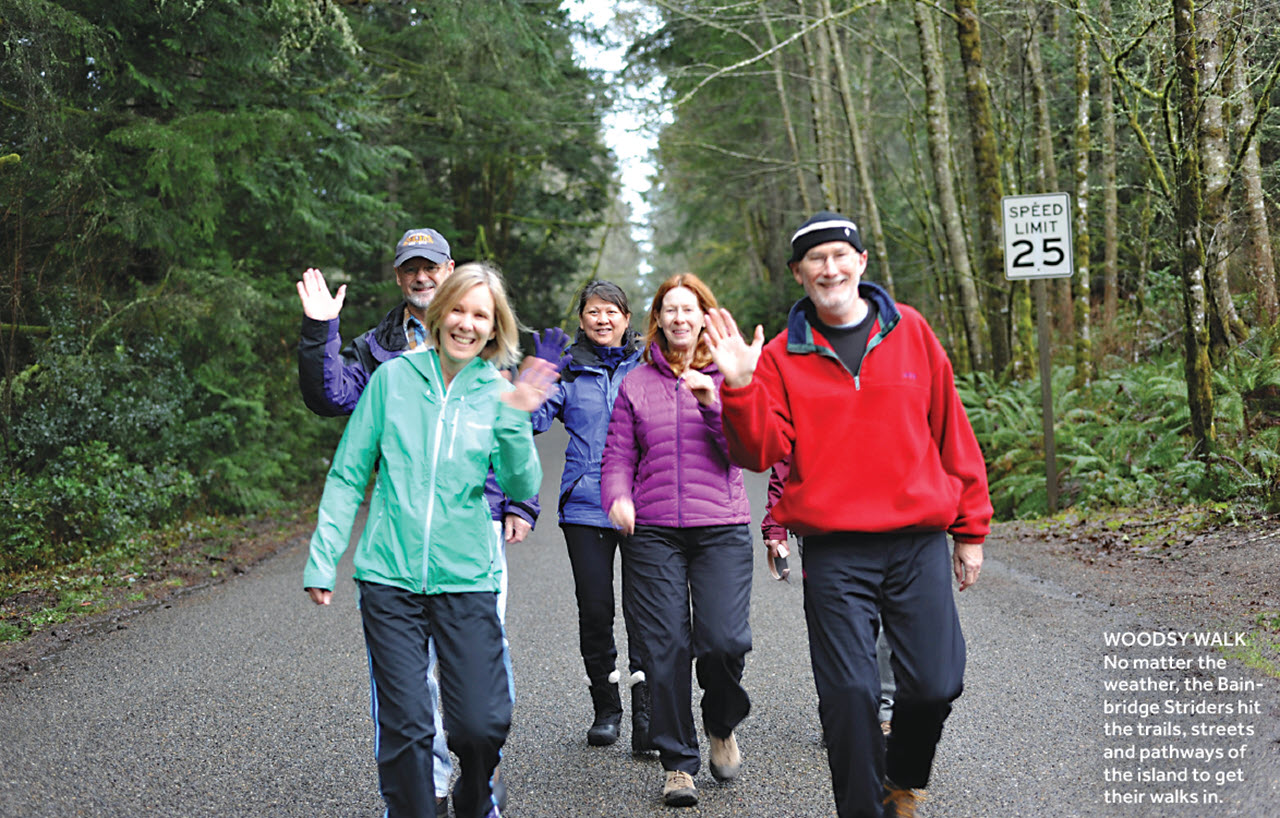 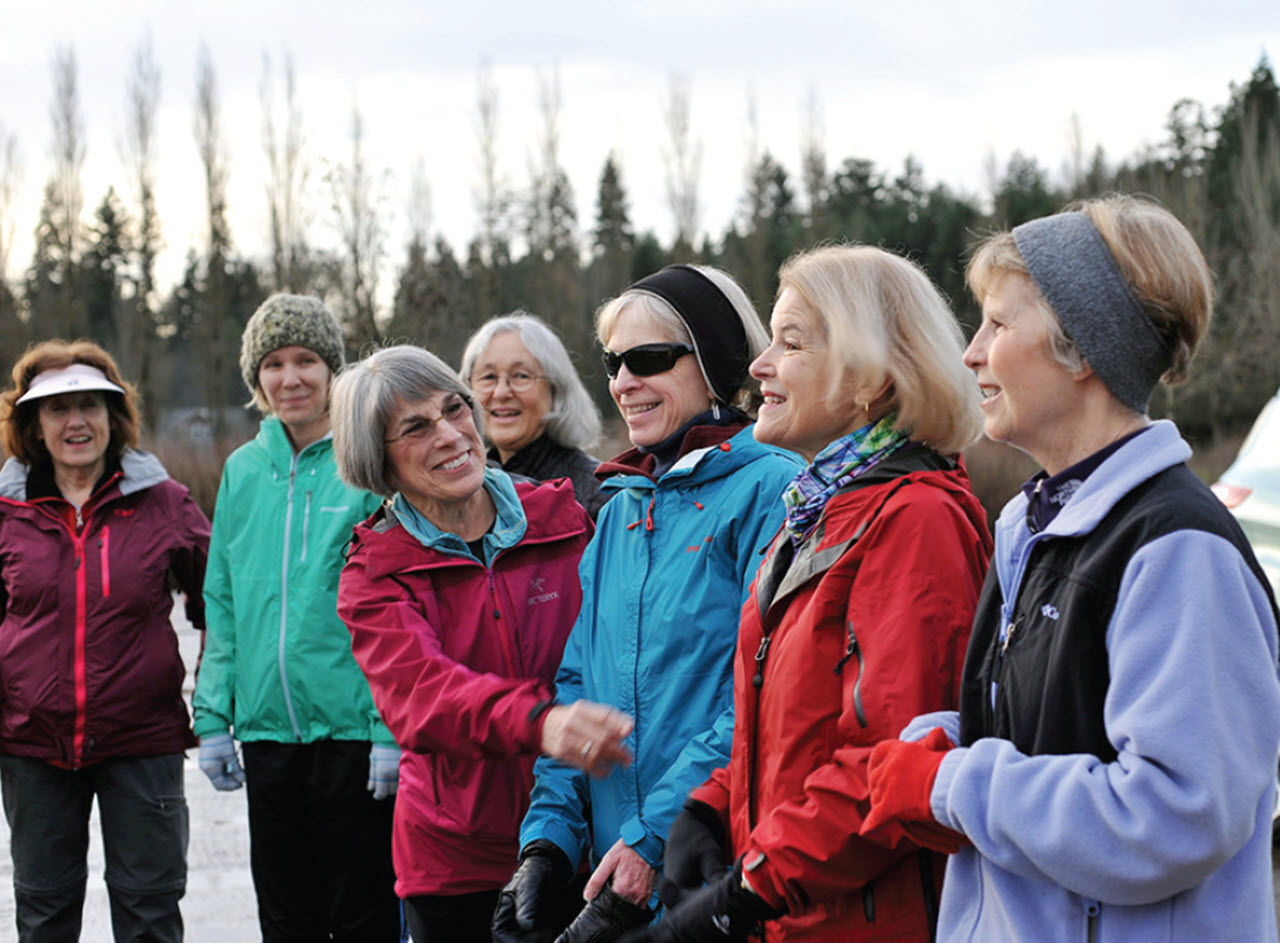 Walk and talk — old friends and new join together for cardio and conversation.