Through their company Earthbound Expeditions, islanders Matthew and Danna Brumley arrange journeys to vastly different sites around the globe, but the focus remains unwavering: immersive, insider travel experiences for the culturally curious.

From a nine-person office near downtown Winslow, the company partners with arts organizations to craft itineraries that travelers can’t find elsewhere. Besides being just plain fun, the adventures build loyalty and raise money for the partner organizations.

In the beginning, “we told them we could create theme- based, educational trips for life-long learners,” said Matthew, 55, who founded Earthbound Expeditions with his wife in 1997. “No one else had done that before.”

Earthbound handles 40 to 50 trips a year, he said; about 80 percent are with public-radio partners. Some are only available to a group’s supporters; others are open to all.

The trips take inquisitive people “to a great destination with a great host around a great subject,” said Amy Hyatt, event manager and custom travel manager for Minnesota Public Radio and American Public Media. Since 2014, more than 1,000 of her listeners have been on 21 Earth-bound excursions, including to Cuba, South Africa, Italy, Patagonia, Poland, London and Paris, she said in an email interview.

“What’s really exciting is that I have a 26.3 percent return rate—that means more than one in four guests have taken more than one of our trips,” said Hyatt, who works with Earthbound on three to five tours a year. “It is not uncommon for guests to ask half-way through a trip, ‘So, where are we going next year?’ And many bring friends and family on their next trip as well.”

Danna said one key to Earthbound’s success is providing a “sense of meaning” to travel. “It’s a vacation, to be sure. But the guests who travel with us aren’t trying to empty their minds. Learning about botanical gardens or music or culture brings a sense of fulfillment.”

The trips typically include a host who is familiar to the travelers; for example, an on-air radio personality or other expert. Earthbound handles the particulars and provides skilled guides—including the Brumleys on some excursions.

One travel host is Peter Van de Graaff, music director for classical station KWAX in Eugene, Oregon, and program director and host at WFMT in Chicago. He had done tours with other companies before meeting Matthew Bromley a half-dozen or so years ago.

The details are what appeal to classical music fans, Van de Graaff said by phone from Eugene. He and his wife, Kathleen, are professional singers and perform for tour guests. “In Norway, we gave a concert—at (composer Edvard) Grieg’s house—of his music.”

The Brumleys share an enthusiasm for exploring. Danna, 52, caught the bug as a young- ster on family car trips. After majoring in French in college, she lived in Paris for several years. She guides Earthbound tours in France, which, she said, “is still my happy place, because I feel so at home there.”

Matthew became a tour guide to earn money for college. After attending schools in Copenhagen and Moscow, he worked a year on an Israeli kibbutz and did post-graduate work at the London School of Economics. He later worked as a tour guide internationally, eventually with Rick Steves’ company. Matthew and Danna met there when she was learning how a travel guide worked—and he was the guide.

“We went to Europe, and she became my wife,” he said. “We always say we had a great first date.”

The Brumleys chose to live and work on Bainbridge Island, where Matthew visited his grandparents as a child. “We bought a tiny little house where we still live today,” he said. Their daughter, Aiyana, is a high school sophomore; their son, Liam, is a college student.

Besides organizing and leading tours, Matthew did a weekly public radio segment, “Going Places,” for five years. He stepped back from that last January. “It was fun, it was good for the ego, but it was enough,” he said. You still can hear the podcasts at bainbridgeisland.com/brumley.

Because of growing concerns about travel’s impact on the environment, Earthbound joined Carbonfund.org in 2008 and donates $50 per traveler. The money buys carbon credits that support renewable energy, energy efficiency and reforesta- tion projects. “You cannot be carbon-free,” Matthew said, “but we’ll help.” 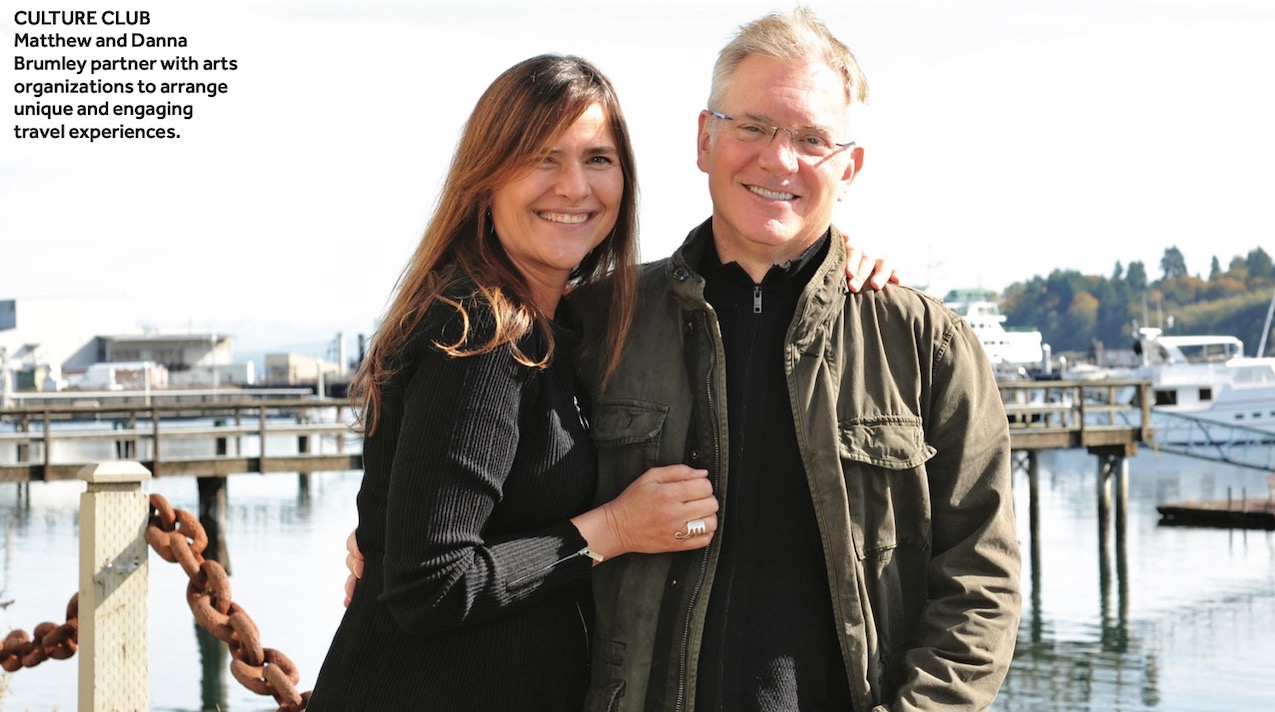