Passion. People find it in unique ways. Sarah Pearl found hers when she stumbled upon manure at 8,000 feet on the John Muir Trail. A lifelong hiker, Pearl was on a three week 210 mile solo hike in honor of her late father. He had been a Sierra Nevada mountain guide and John Muir was his favorite. She came across the odorous pile along a particularly steep stretch of the trail— somewhere, the seasoned equestrian said, her horse would have “broken his leg in the first 10 seconds.” How could there be horse droppings so high up?

It turned out that the manure came from pack mules. Pearl was filled with intrigue—and as she walked, an idea grew. At a subsequent resupply stop, Pearl called her husband. “I have this great idea,” she said to Barry. “I’m selling my horses and getting mules!” Before the hike, Pearl had ridden horses for six years, a pastime she’d taken up at age 53 to bond with her horsecrazy daughter, Carly. After her daughter left for college, Pearl contemplated selling her two show jumpers, but she never imagined that she’d be trading them for mules—the reputedly stubborn, typically sterile horse donkey hybrids. But true to her word, that’s just what she did. Inspired to understand the world of mules, Pearl spent a week in Nebraska with father-son team Tom and Levi Jones, famed purveyors of “select saddle mules.”

Among other things, she learned that mule personalities differ greatly from horses. But that didn’t deter her. “I walked away feeling that I loved mules,” she said. “That I could do this and that I had allies in the mule world.” Equipped with just a saddle and headstall, Pearl began the search for her first mule. The hunt took her to Kentucky, where she found Trinka, a 13 yearold molly who at 15 hands (one hand is the 4 inch unit by which equines are measured) was small enough to mount from the ground.

Word of mouth and Facebook groups—such as the oddly specific OMG! Old Mule Girls (women born before 1962 who’ve owned a mule)—led her to her second mule, Trevor. At 14.3 hands, the 13 year old mule was reared to be a show mount but it wasn’t until later that she discovered Trevor’s greatest flaw—his propensity to spook. When a mule spooks, it may jump sideways or change direction abruptly, which can unseat an unsuspecting rider. “He’s strong,” she said. “I just didn’t understand him.” To better handle Trevor, Pearl enlisted the help of horse whisperer Matt Olson, a 25 year old cowboy who runs a barn in Poulsbo.

Even with no specific mule experience, Olson has a gentle nature that gave him an immediate connection to Trevor and Trinka. The best way to school a mule, you ask? “You wait,” said Pearl, who can be seen working with Olson and the mules in the Grand Forest and at Battle Point Park. “You maintain pressure on the mule until it complies with a command.” After the animal submits, she said, you relax and release. “Mules have to think,” Pearl said. “They put their ears forward and then they think about it.

You just have to let them process because they’re so smart.” At a subsequent threeday mulemanship clinic in Oregon, Pearl learned another tip for handling her mules: make the right thing easy and the wrong thing hard. Pearl’s goal is to pack Trevor and then pony him to Trinka (the art of leading one mule while riding another) for a two-month excursion—a 500 mile solo trek of the Washington section of the Pacific Crest Trail in 2021. In preparation, Pearl enlisted Ed Haefliger, a 75 year old authority on pack stock on Olympic trails, to teach her century old skills for the journey, like how to load a mule—how to place the saddle to haul goods, how to balance the load, and how to cover it with a tarp and tie specific knots.

As daunting as the undertaking seems, Pearl’s biggest challenge remains the mules themselves. “Mules are so standoffish,” she said. “They want your resume.” But after working with Trevor and Trinka almost daily for over a year, Pearl feels she’s made headway. The bottom line, she said, is that you can’t buy the perfect mule but you can create a perfect partnership. 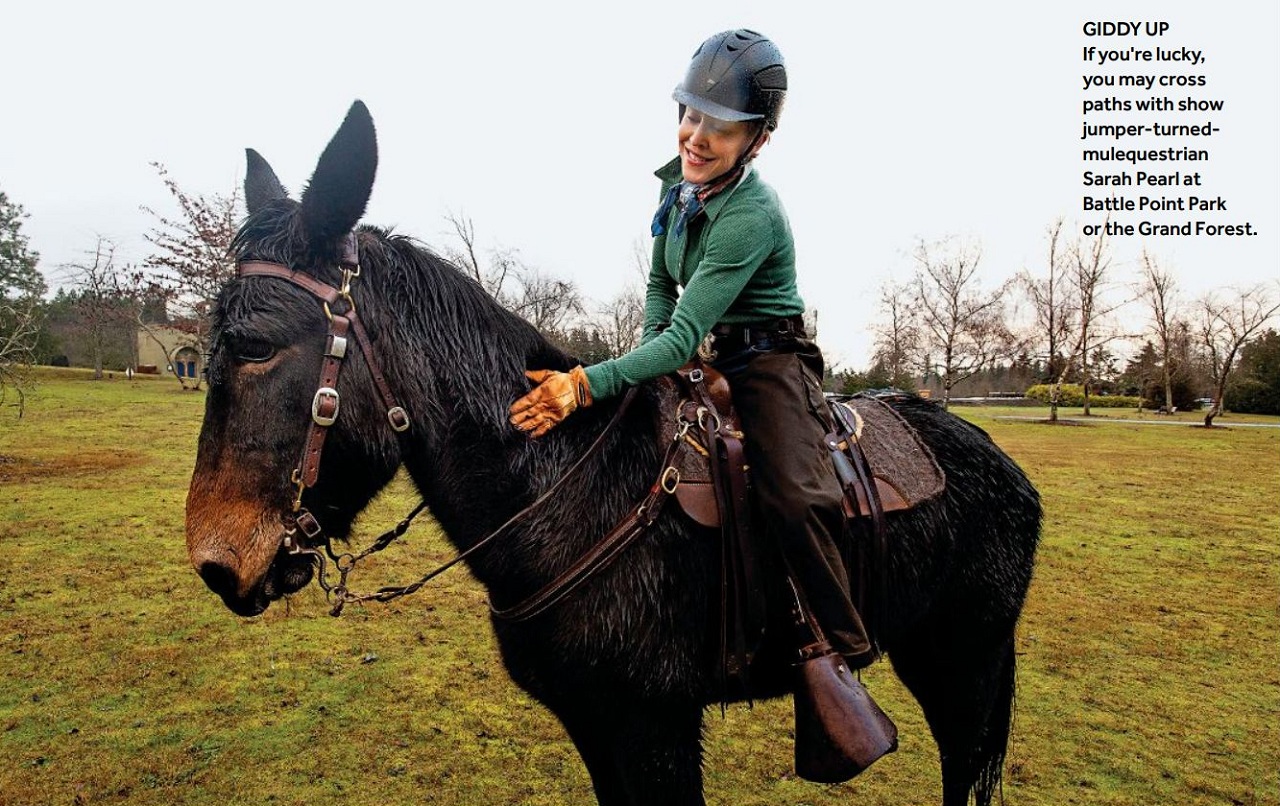 Rain ’Splaining // It’s All in the Lay of the Land

Horsing Around // Jumping Into Our Equestrian Community