What’s the Cache? // Geocaching Catches on With Islanders

Sometimes it can feel like you’ve dropped into a Harry Potter scene, particularly if you’re in downtown Winslow surrounded by muggles (the official term for nonparticipants). Other times it can feel like a Lewis and Clark expedition, especially if you’re a newbie bushwhacking through the Grand Forest. What is IT? Geocaching—a real-world treasure hunt in which players use GPS technology to find caches stashed almost anywhere. Chances are you’ve walked right past one, unaware.

The game was launched May 3, 2000, the day after the U.S. government opened its Global Positioning System technology to the public, improving accuracy from 100 meters to better than 20 meters from a target. Dave Ulmer, a computer consultant in Beavercreek, Oregon, hid the first cache and posted it to an online GPS users group. The game spread like wildfire and later that same year, Jeremy Irish, a web developer in Seattle, launched the website Geocaching.com with the latitude and longitude coordinates for 75 caches around the world. Today there are more than 2,457,091 geocaches in more than 180 countries, with worldwide headquarters in Seattle at N 47˚ 38.938 W 122˚ 20.887.

Geocaching jumped the pond to Bainbridge when a player calling himself Sirius Black hid the Harry Potter Cache at Fay Bainbridge Park on February 3, 2002. Since then around 100 caches have been hidden by players with names like Shaggy, Scooby and Velma, Goblindust, and BainbridgeYew in places like Battle Point Park, Gazzam Lake, Pritchard Park, Fort Ward, Hilltop Park and Rockaway Beach. Creative titles for the caches include: A Throne in the Wilderness, BI Stonehenge, Stop for Winslow Construction and Dr. Who’s Sibling.

Finding the GPS location is only half the fun. The catch is, you don’t know what you’re searching for. A cache can be just about anything large or small, from a Tupperware container to used ammo cans, film canisters, camouflaged plastic corn-starch jars, or containers designed specifically for geocaching in the shape of a pine cone, rock, branch—even a fake bolt. Inside the cache you may find treasures like Mardi Gras beads, shells, bracelets, bus tickets, toy figures or other surprises.

Playing the game is simple: choose a cache from the online list; find the location with a GPS unit or GPS-enabled smart phone; search the nearby area for the geocache; once you find the cache, take something if you like (but leave something if you do); sign the cache’s logbook; replace the container in its original spot; and log your find on the website.

Rich Mroz and his son Sam (SilverKittens) jumped into the geo-caching fray in 2011 when Sam received a Christmas present from his aunt that included a handheld GPS unit and the geocaching books It’s a Treasure Hunt and Let’s Go Geocaching. The father-son pair quickly found their first geocache hidden in the Grand Forest and went on to log 228 more finds in several states. “I like finding the caches—getting to within 30 feet and then getting into the other person’s shoes, thinking about where they might have hidden it,” Sam said.

Bitten by the geocaching bug, the two began hiding geocaches around the island and now maintain 10 different caches and follow 14 “trackables”—geocaching coins or objects (like a Lego man) with unique geo-caching codes whose movements are logged online. These “game pieces” are picked up and moved around the world, cache to cache. One of Rich and Sam’s trackables went to Spain, Portugal, North Carolina, and then to South Africa for a total of 25,000 miles.

Geocaching is a worldwide game with its own acronyms, etiquette and geotourism. It’s an adventure for anyone—from student to retire—who wants to get out and explore the world or their own backyard. As geocachers say: TFTC (thanks for the cache), Bainbridge Island! 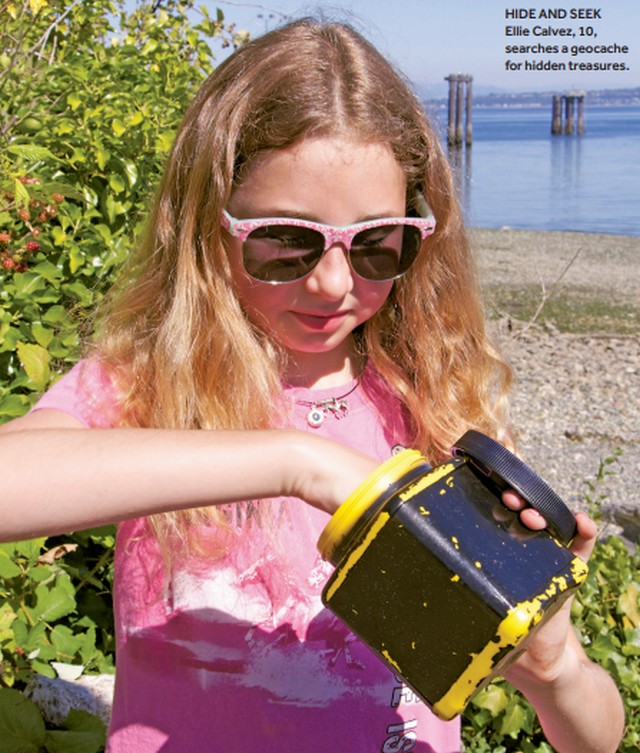