What They Found // A Local Love Story Started in LAOS

Every Resident of Bainbridge Island has a story, a personal mosaic comprised of events and relationships that make up what we call “life.” Relative newcomers to the island Karen and Sid Wang, owners of the vintage boutique Meli Melo, have a unique, colorful and poignant mosaic of their own. In the 1970s, Karen and Sid each attended the same private middle school, called Lieutou, in Vientiane, Laos. But the impending Communist takeover of the country incited both of them to flee as teenagers. They escaped separately, Sid on his own, Karen with her parents, both in boats, crammed with compatriots. These boats took them over the Mekong River to refugee camps in Thailand.

Although this was a time of great hardship and uncertainty, both Karen and Sid said they also felt hopeful that they would eventually land in a better place—and that they did. Karen’s sister preceded her to the U.S. and had become a student at the University of California, Berkeley. She was able to sponsor the remainder of her family and brought them to Northern California. Sid’s brother had also emigrated before him, and was able to bring Sid to Spokane, where he had been living. Sid’s parents, however, were left behind. He did not see them for almost 20 years.

Eventually, they were able to come to the Northwest as well and were reunited with Sid and the rest of their family. Fast forward 30 years to the 2010 Lieutou school reunion held in San Francisco. Facebook had enabled this globally dispersed group of Laotians who attended Lieutou to find one another. (There is such a strong alumni connection that they reconvene annually in different places around the world.) Both Karen and Sid attended this particular reunion. Soon after, they started dating long distance. In 2011, Karen and Sid were married. They held a hippythemed outdoor wedding on what Sid characterized as a “magical night,” bringing them back to the 1970s when they first knew one another.

Looking for a quiet but welcoming town that would offer them some of the friendships and sense of belonging that they so enjoyed in Laos, Karen and Sid landed on Bainbridge Island. Together with their Muppet-like dogs, Scout and Buddy, they quickly made the island their home. Karen brought her custom wedding veil business with her, which she, as an e-commerce pioneer, established almost 20 years ago. When she started the business in the 1990s, she hired impoverished women from her father’s Chinese village to create the individualized veils, enabling them to develop a trade skill and earn a living that they otherwise wouldn’t have had. Sid initially worked for Starbucks and is now employed by Premera Blue Cross. Both juggle multiple careers and have spent enormous time and energy on bringingMeli Melo to life.

Most recently, they doubled the size of the shop, which resides in the space below Eagle Harbor Book Company. “We want to create a place that enhances downtown Winslow,” Sid said, “and we want to contribute to the community.” Karen said she has always had a strong eye for the aesthetic. This talent initially translated to the success of her veil business. But it also guides her procurement of the used treasures that she sells in their store—clothing, furniture, jewelry and art. As to why she chose to deal in vintage merchandise, Karen responded: “Reduce, reuse, recycle is my philosophy. I really believe in being green.” And in that same vein, these global citizens are also hoping to make their shop a hub for dog adoption. At first glance, vintage goods, bridal veils and homeless dogs might seem like an odd combination. On the other hand, Meli Melo means “hodgepodge” in French. So, just like Sid and Karen, it’s a perfect fit! 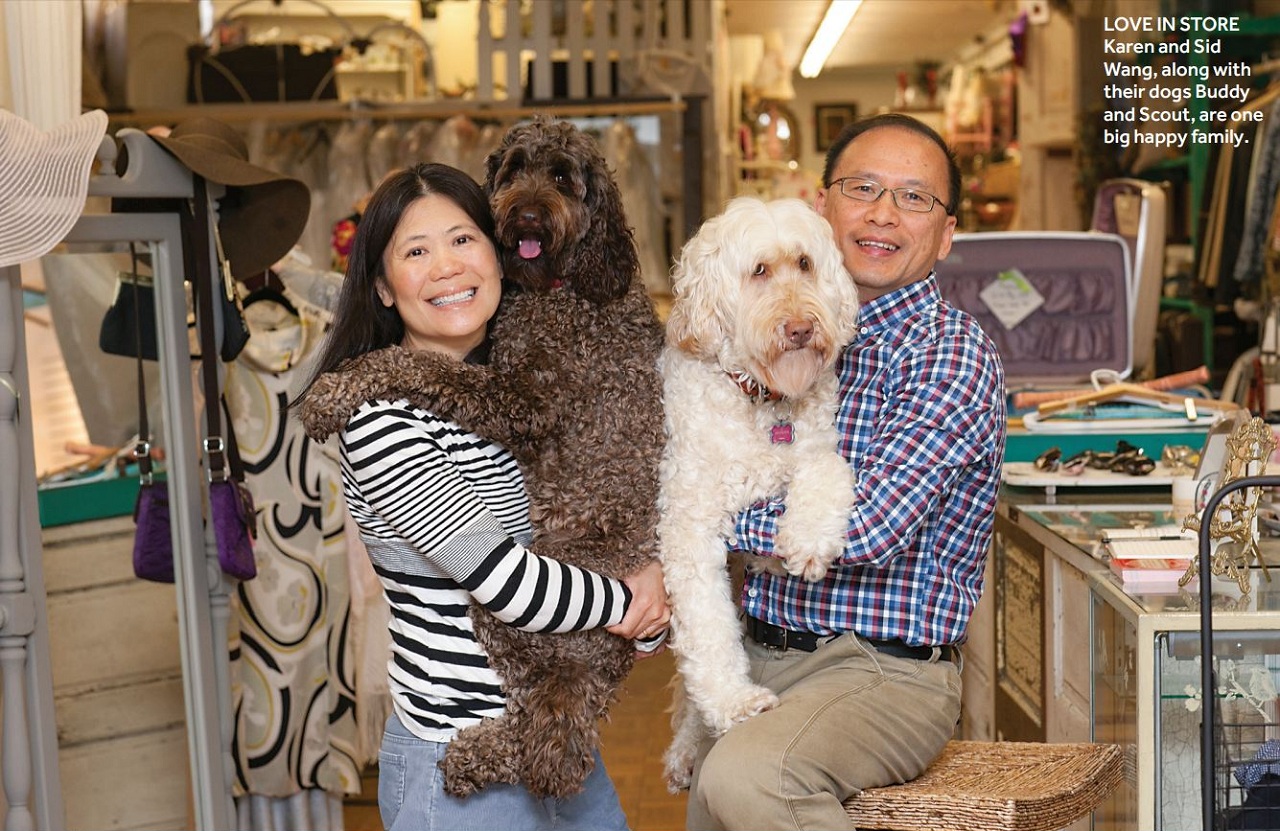