Bainbridge Island has its share of unique gardens. Islanders enjoy giant dahlia blooms, stands of whispering bamboo, roadside surprise daffodils and squishy tidelands speckled with Olympia oysters. Oyster gardens? With help from our own Puget Sound Restoration Fund (PSRF), the answer is “you bet.” Founded in 1997, PSRF was created out of a desire to help a segment of Puget Sound that was not being served—seriously endangered native shellfish. Betsy Peabody, who as executive director is a daily driving force in the organization, has a singular reason for how she arrived at the notion to help restore rapidly dwindling shellfish populations.

“I’ve always been interested in what I call ‘worldbuilding organisms’—corals, mangroves and shellfish beds. These are biogenic species that build structures that support other organisms, including humans,” she said. “Marine systems are really a part of our human story.” Starting small, PSRF now has 10 staffers and 12 board members. It also has a community-supported shellfish farm at Port Madison, and for the last five years, has been selling shellfish gardening kits to locals with tideland access.

Basic seed starter kits produce small-scale shellfish farms that provide a dozen or so oysters each harvest. These kits help novice shellfish farmers do it properly, using seeds from a Washington state-certified shellfish grower that are local, healthy and don’t carry diseases from other areas. A harvest at the Port Madison farm happens at low tide several times a year, bringing out volunteers who help bag oysters, taking a break to shuck and slurp a fresh one now and then. More importantly, every single oyster, clam and mussel growing here improves the health of Puget Sound—this means water, plants, birds and humans all benefit from these unassuming, easily damaged creatures.

“Both the shellfish gardens around the island and the Community Shellfish Farm give people a sense of being rooted to something that stretches back thousands of years,” Peabody said. “These shorelines of ours have supported human habitation for so long, and have provided an abundance of food. Planting some oyster seeds on a beach provides a sense of that which is worth preserving.” However, the PSRF is not all work and no play. “The work we do is scientifically based, but we also try and incorporate some whimsy into it. We’re trying to restore kelp beds, but at the same time, we’re also holding workshops on how to press seaweed into art prints,” Peabody said.

With 16 productive years behind her, Peabody is eager to move PSRF forward to the next level. “I’m very interested in the creation of refuge areas as we encounter changing seawater,” she said. “We need to hold onto healthy marine systems because ocean conditions are changing around us as a result of our own actions. There are things we can do in local bays that might improve seawater chemistry globally. I want to rebuild historically larger shellfish populations back up. I want to work to help address ocean acidification and engage people in this work in creative ways.”

What does Peabody wish Puget Sound residents would do for the health of our home? “Of course you should pick up your pet waste, and use fertilizers that don’t cause nitrogen imbalances,” she said. “But I think everybody should make a point of spending a day on the beach, reacquainting themselves with habitats and resources that have supported our human evolution. If you strip away all the elements of modern living, we still are humans living in a place that feeds and supports us. It’s a good reminder that we need to tend to the place, both today and throughout our evolution.” Which sort of makes gardeners of us all, tending to this beautiful plot that is our island home. 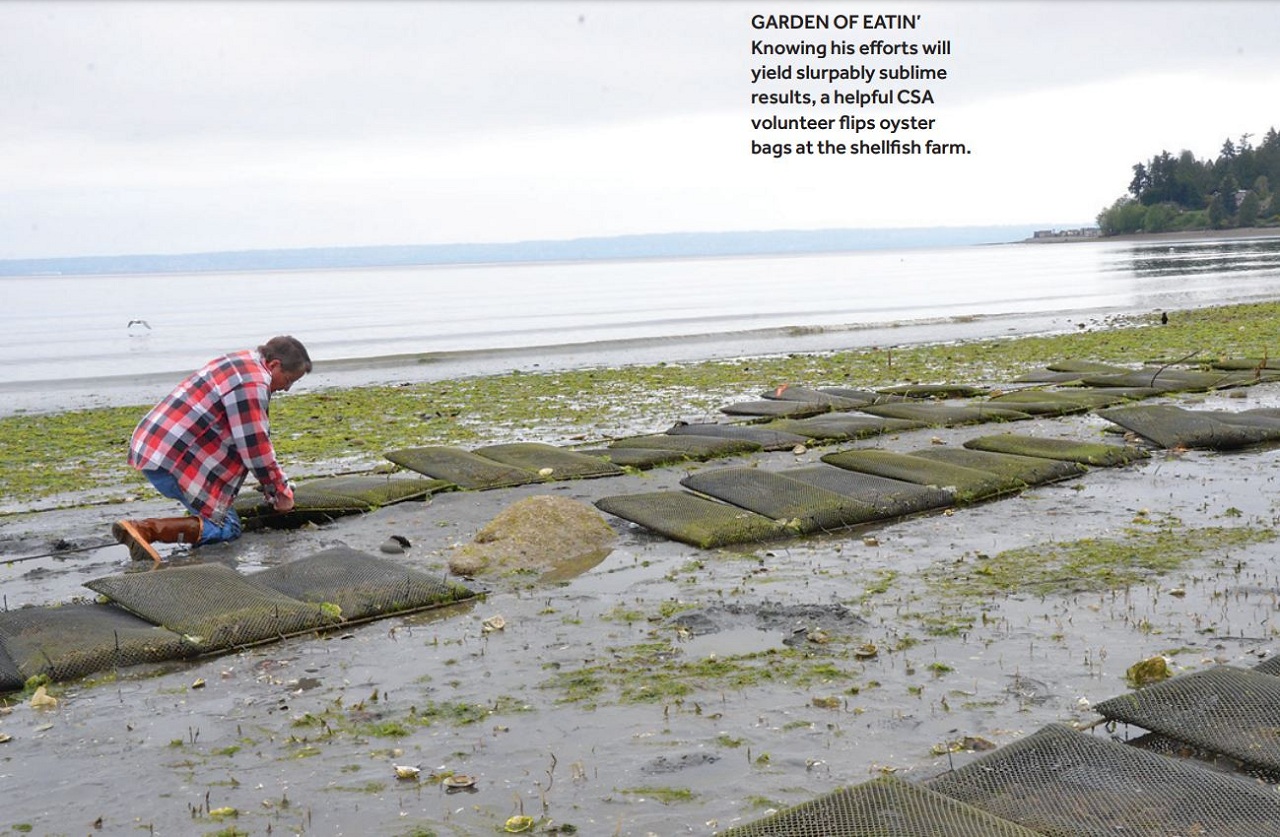 Can You Dig It? // Shellfishing on Bainbridge and Puget Sound