The Cycle of Life // The Native Cycling Species on Bainbridge

Bainbridge Bikes. Some people ride for fun, with a Burley hitched to the back and their kids in tow. Others deck out in spandex, climb onto a carbon-frame road bike and fly down the highway.

And some folks just bike for donuts.

Sluy’s Donuts to be exact.

Or maybe breakfast at the Farm Kitchen. Whatever the dining destination, the Biking For Donuts cycling group has been pedaling for pastry since 2011. Started by local spin instructor Jackie Fabbri and her partner Maureen McNulty, the group is open to riders of all types, sweet tooth not required.

The couple has lived here since 1995 and found cycling on Bainbridge challenging at first. After a few tough slogs up Baker Hill, they “knew [their] 10 speeds weren’t going to cut it,” Fabbri said. Over time, they used cycling as a way to meet people they had something in common with, whether out on the road or in the spin classes they took at Island Fitness.

“We built community in spin classes. We realized that people who ride indoors often don’t ride outside,” Fabbri said. By starting a non-competitive, all-riders-welcome group like BFD, Fabbri and McNulty were able to build on friendships as well as help cyclists put spinning fundamentals to work on real roads.

For other islanders, biking is just a good way to get around. For Marilyn Ostergard, it’s the only way.

“I haven’t ever owned a car,” Ostergard said, while sipping tea in the 300-square-foot home she built herself in 2005. Her door-to-door commute to the University of Washington, where she works with the sustainability office and teaches classes on information visualization, is nine cycling miles; three to the ferry and then six more to campus.

“I like it because it’s low impact, but I think I would cycle even if driving had no impact,” she said. Her bicycle is a basic utilitarian workhorse, and her gear is also pretty no-nonsense—wool long johns, quick-dry hiking pants. If her shoes get wet, she stuffs newspaper in them at work so they are dry for the ride home.

“The commute is invigorating and empowering. Bicycles are amazing—you can get so far without that much exertion and under your own power.”

For a handful of elite island cyclists, exertion, power and stretching themselves to the limit is the terrain they furiously pedal. Both local cycling instructor and private coach Kathi McMahon and photographer Chris Wingfield have cycled for the Hagens Berman Racing Team. Angela Cudone-Sheridan, a registered dietician and diabetes educator at Virginia Mason, currently races for the SCCA/Starbucks Team.

McMahon credits the grueling Bainbridge hill climbs with helping her achieve category 2 status in racing (the lower the category number, the more experienced and skilled the cyclist is). “Someone who trains over here is automatically in the stronger section of the pack,” she said.

It only took one time trial for Wingfield to be hooked on racing. It took dedication to gain the category 1 pro elite status he achieved by the time he retired in 2013. “Cycling, out of any sport, is so hard because of the mental fortitude it takes to keep pushing through the pain. The person who can suffer the most is the one who wins.”

Cudone-Sheridan didn’t start racing until she was 49. A former marathoner and triathlete, she started racing at McMahon’s suggestion. “It’s exciting; you have to be alert the whole time,” Cudone-Sheridan said. And even with her late-in-life start, she proudly shared that her team recently won a time trial for women 50 and over. “We even beat the 40-year-olds.”

Some people just bike because they can’t believe they can. In her mid-50s, Jenny Conaty is elated to be cycling 100 miles per week. A bike commuter since 2005, Conaty underwent weight loss surgery in 2011 and has now done several century rides, trained on Hurricane Ridge and maintains a quick 18-miles-per-hour average on her weekly group ride to Port Gamble. 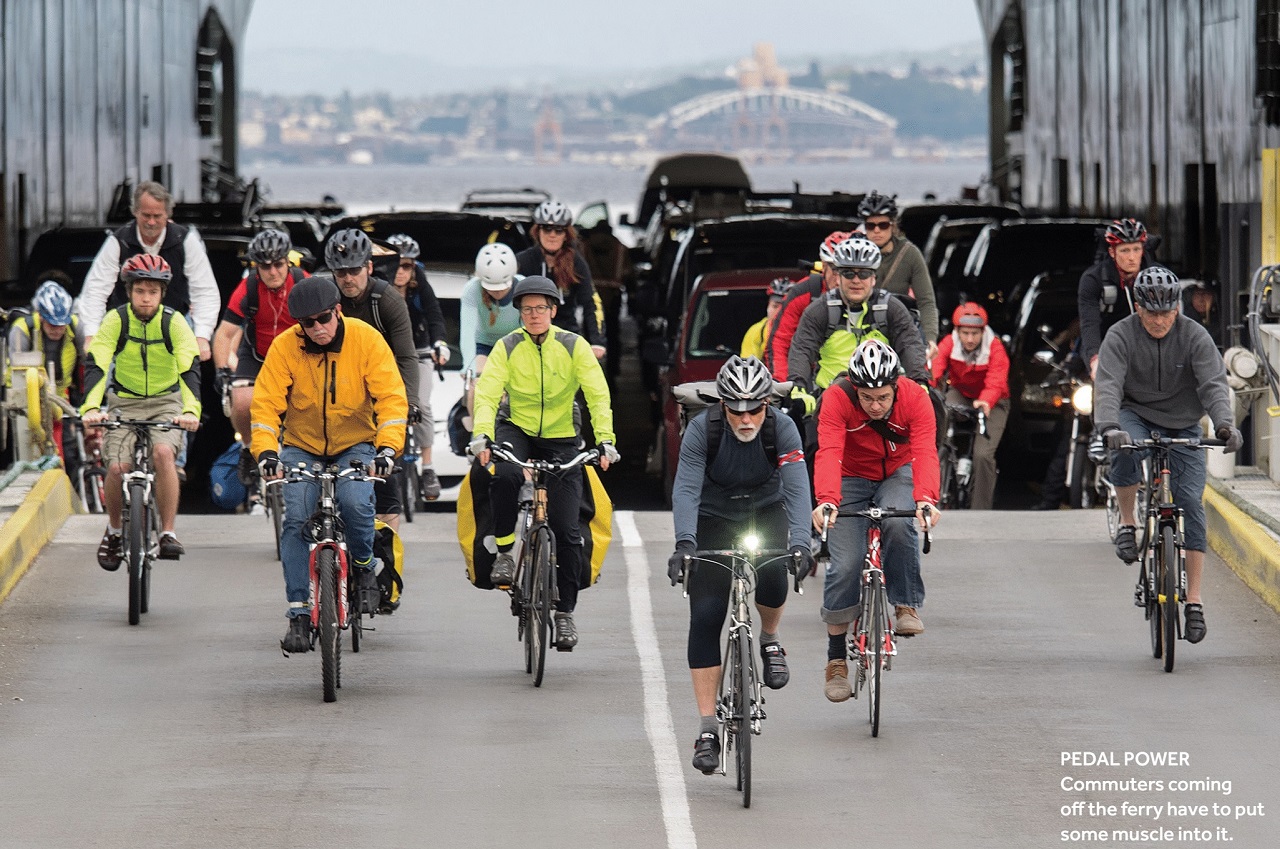