Murat Tasdemir arrived in Tucson, Arizona, from Istanbul, Turkey, in 1995 with $130 and 65 Turkish rugs. Within a couple of days, he sold over $40,000 worth of his inventory. Murat’s welcoming demeanor and passion draw people to him, including a Bainbridge couple who bought rugs from him in Turkey and then invited him to the island to sell rugs from their garage. That’s how he ended up on Bainbridge Island. Nearly two decades later, Murat is a near celebrity in the home design world, and his store Island Ambiance is a fundamental part of the quaint elegance emanating from the retail corridor on Winslow Way.

So tell me, who is this guy, Murat Tasdemir?

I was born in the eastern part of Turkey. My mom and dad lived in a village area called Malatya. But we moved when I was very young. I really grew up in Istanbul. My dad was a photographer. And my mother was a housewife. She never ‘worked,’ but she worked her tail off by taking care of all of us.

How did you get into the rug business?

My family did not have enough money for me to go to university. My brother gave me a business card telling me that this guy was hiring a worker in his rug store. My job was to clean the shop. When a customer came to look at rugs, I brought tea for them. I swept the shop and folded the carpets. Later, I built a partnership with another rug seller. The building next door to his shop was a political prison—not very attractive. But in 1994, it was bought by a Canadian company and became a five-star hotel, and his shop became a gold mine.

What sustains your interest in your job?

My thing here is not just a job. My thing here is to reflect the beauty, the art, the knowledge, the culture. Carpet to me, it’s like a poem. Some of these people who make the carpets do not even have an education from high school. And they do such amazing workmanship like this. In my eyes, they’re engineers. They’re very smart people. It’s like a born talent.

Do you get to deliver rugs to interesting places?

I do! I just designed the interior of a 300-year-old home in Pennsylvania. I also worked on a beautiful plantation home in Alabama. Back in Turkey, I sold one lady a $150 rug. It was just a small kilim. When I went to L.A. to see her, she introduced me to the Warner Brothers vice president and so many movie people. Because of her and a small $150 deal, we sold over $1 million in rugs through her network of friends in L.A.

What else interests you besides rugs?

Well, I want to learn how to ride a motorcycle. I’m gonna learn and have my license. And I promise you I will have my 1950s vintage bike. That’s my dream. I love fishing. I love playing chess and I’m a very good ping pong player. I love traveling. Just give me a backpack and a camera.

Where are you going on your next journey?

Alaska, for decorating jobs in Juneau, Anchorage and Fairbanks. I still remember the first time I went there. I wore a dark suit when I went out in the evening to play pool. They were all looking at me like I was up to no good. This time, I know better. 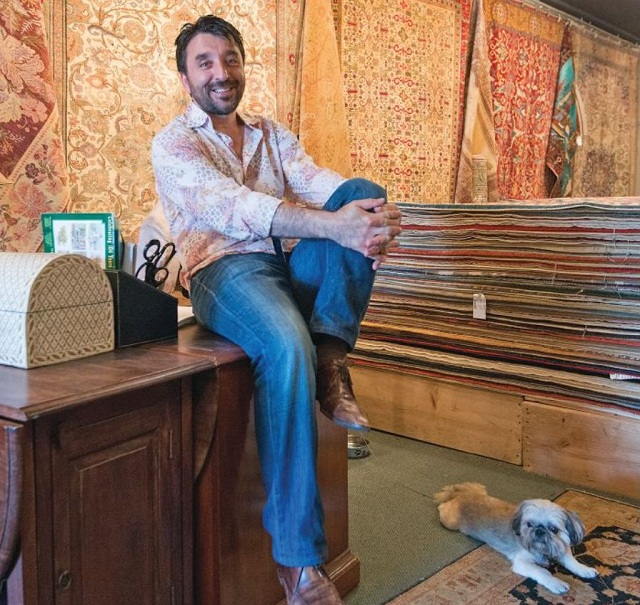