A walk among the old headstones reveals a striking diversity.

“People came here to work from all over the world: Scandinavians, Japanese, Hawaiians, Filipinos, Chinese,” noted Brian Copp, a volunteer at the Bainbridge Island Historical Museum. “Bainbridge Island today reflects the same incredible, cross-cultural representation we see at the cemetery.”

When the cemetery was established in 1880, area residents tended to “self-segregate,” living near others from similar backgrounds. But that was not the case in death, said Copp, who has researched Port Blakely Cemetery and was invited to give a talk about it earlier this year at the history museum.

The only section set apart is an area Congregation Kol Shalom bought to create a Jewish cemetery for its members, said Ray Keeney, treasurer of the 15-member cemetery board. But Jewish people have been buried in other places in the cemetery as well.

The oldest known burial is John K. Parker, who died in 1880 at age 39. But it is likely that there are older, unmarked graves too. Wooden markers rotted. And some early burials might not have been marked.

Gravestones are reminders that not so long ago, life was short. Adults often died in their 40s or younger. Deaths of infants and children were a fact of life.

“Every single grave is a little piece of a life story: age, sex, maybe an occupation, sometimes relationships,” said Copp, a retired sociology professor who moved to Bainbridge two years ago from Wisconsin.

Keeney and Copp both praise the work of historian and author Andrew Price Jr., whose research on the cemetery provides a window into history.

Keeney estimates 1,200 to 1,300 people are buried in the old section. Nearly 800 plots were added when the cemetery expanded in 2009 to about five acres.

People who live on Bainbridge Island or who have someone buried in the cemetery can buy up to three plots, Keeney said. “We can sell one on a minute’s notice, or you can reserve for the future.”

Low stone walls enclose some gravesites, and many of these are personalized. Here a blue urn, stone bench, plantings; there a birdfeeder, wooden bench, wind chimes. Some people leave remembrances: toys, photos, keepsakes, flowers. Small stones outline the tops of Jewish markers, a tradition for visitors.

“It’s one of the most peaceful places on the island,” said cemetery board member Lydia Claesson.

A team of gardeners, the only paid employees, maintain the site’s beauty, Keeney said. The cemetery board seeks annual donations from
“family members and other folks that like the cemetery” to help cover costs.

Many people with no connection to the cemetery enjoy walking or running its narrow roads or hiking the steep trail that connects to Blakely Harbor Park, Keeney said. Others come to enjoy the solitude or watch a sunset.

One rainy afternoon, a couple tended a grave enclosure. A woman sat reading in a folding chair under a roofed shelter. A man and a dog drove up in an SUV then set off down the path to the park below.

A separate trail connects to Islandwood, which flanks the cemetery on three sides. Classes at Islandwood often visit, said Copp, who’s also a docent there.

There were two vandalism incidents in 2007, but nothing since, Claesson said. Keeney credits the frequent visitors with helping safeguard the cemetery.

Whatever the reason for a visit, Copp said, people should be respectful.

“Cemeteries are both public and private,” Copp said. “For some, it’s a spot for a bit of romance or a place to take a quiet walk. But it’s important to remember that for the families of people buried there, the cemetery holds a different, personal meaning.” 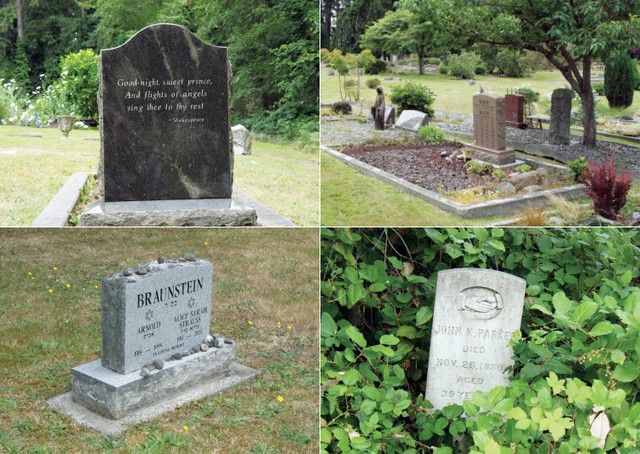