When students and teachers file through the doors into the inspiring, light-filled new Captain Johnston Blakely Elementary School, there are few reminders of the aging building it replaced last year, save one.

Like an old friend, welcoming them at the main entrance, is a tree. A very special one—a beloved Japanese maple that has stood more than five decades.

Its journey is a remarkable one involving a tree whisperer, swift action and community spirit.

Upon learning that the school district’s demolition plans (because of construction costs) included cutting down the revered maple, international tree doctor and islander OIaf Ribeiro became invested in saving the tree he had long admired.

“It’s a rare maple,” said Ribeiro, whom some call the Lorax of Bainbridge for his tree-saving crusades on the island. “There are few so beautifully shaped. It would have taken several generations before you get another tree like that.”

Ribeiro got an $18,000 estimate from Big Trees, based in Snohomish, to transplant the 43-foot specimen a few hundred feet to the front of the new school building. He also got the project’s landscape architect on board. As 2018 drew to a close, the school district approved the move on the condition that it be privately funded and completed over the 2019 mid-winter break in February. That gave Ri- beiro and a team of passionate allies just a few weeks to raise the money, $7,000 of which was due by February 1.

They kicked their fundraising campaign into high gear, coordinating with the Blakely PTO to crank out emails, flyers and social media posts. The flyer caught the eye of Emily Gustafson, who contacted the fundraisers and filled them in on the tree’s backstory. Gustafson and her fifth-grade classmates planted the maple back on Arbor Day 1967. They sold hundreds of cupcakes to raise $26 for two saplings, one of which matured into the beauty so many were now working to rescue.

“I almost fell over,” recalled Blakely parent and member of the tree-saving team Christina Doherty, who got Gustafson’s call and then tracked down an old Bainbridge Island Review story from the Historical Museum that detailed the Arbor Day event.

As the tree’s history came to light, donations poured in. One Blakely family generously agreed to match $5,000 in dona- tions. Blakely Principal Reese Ande offered to dip into the principal’s discretionary fund, but it wasn’t necessary. The breathtaking campaign topped its fundraising goal within a month. “People really came through for that tree,” said Ribeiro.

There was debate, however, about whether the expense and risk were worth it. There was no guarantee, after all, that the tree would survive the move. Ande harbored no doubts. The tree makes an emotional impact, he said, symbolizing community and providing an element of continuity between the new and old buildings.

“Everyone thinks it was one of the best decisions we made,” Ande said.

Ribeiro, too, spoke of the intrinsic value of old trees. It’s hard to put a price tag on the psychological, environmental and aesthetic benefits they provide, he said. The plant pathologist, who donated his time and expertise to the project, continues to monitor the maple’s condition. It bloomed last fall, which is a good sign.

“There were a lot of skeptics that said it couldn’t be done,” Ribeiro said. “I’ve moved enough big trees. I knew we could save it. Now it’s spectacular.”

Ribeiro is not the only one keeping an eye on it. Blakely kindergarteners are spending the school year observing and sketching the maple through the seasons as part of their science curriculum. As teacher Susan Williams noted, the tree and its story are a perfect subject of study. 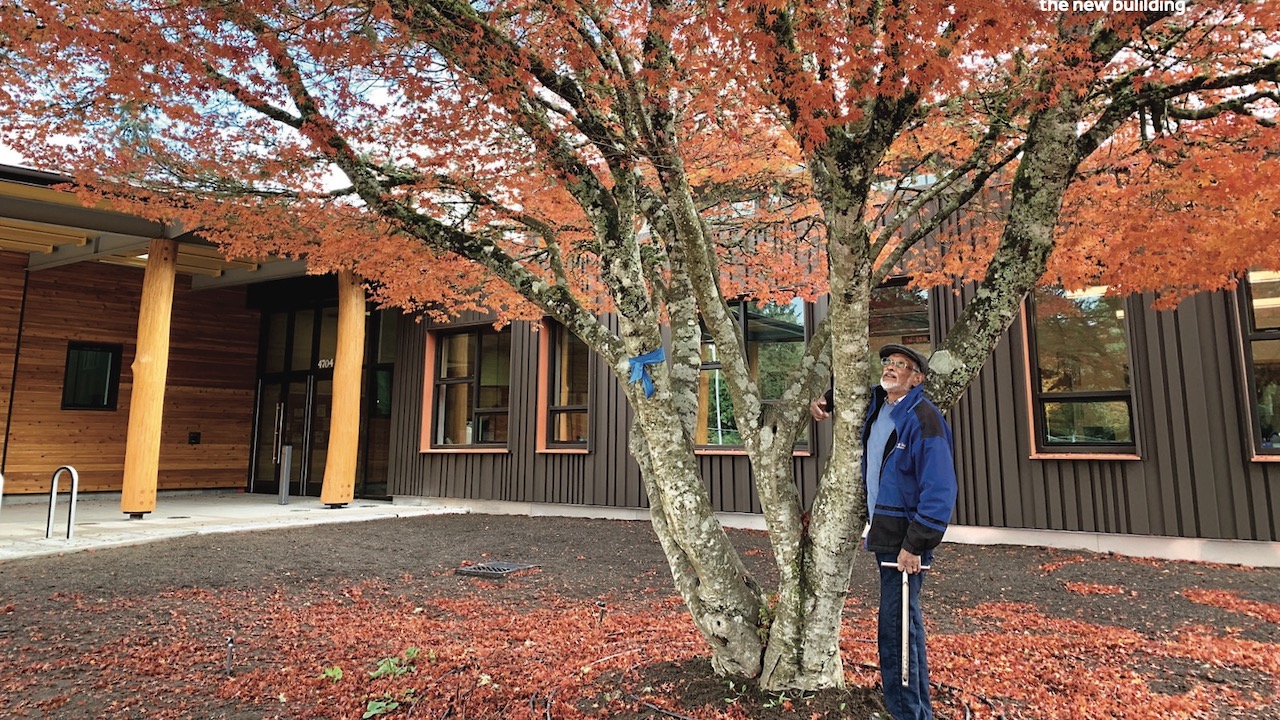