Winslow’s “front porch” has a lot more curb appeal thanks to the new Waypoint, the welcoming entry at the corner of Winslow Way and Highway 305. Dedicated on March 1, the formerly cringe-worthy lot is now a pleasant meeting and resting spot designed by noted island architect Johnpaul Jones, whose many projects include the National Museum of the American Indian in Washington, D.C. For 24 years, the former Unocal gas station site surrounded by chain-link fence was not so much of a welcome to visitors as it was a shrug of the shoulders.

“Come on in, or don’t…whatever,” it seemed to say, as pedestrians moving in both directions angled for sidewalk space. A homey hand-painted welcome sign and colorful banners advertising community events could not disguise the ugliness. That ugliness was more than skin-deep. The one-acre lot skirting the Winslow Ravine is on the state Department of Ecology’s Hazardous Sites List because of contaminants from the former gas station. Unocal had removed contaminated earth from the site and replaced it with “clean dirt,” but contaminants still remain about 30 feet down. The site that nobody wanted to deal with might have stayed that way had it not been for the determination of a team of volunteers led by longtime community leaders Jim Chapel and Bruce Weiland. Chapel recalled sitting in his car after getting off the ferry and looking yet again at the shabby corner.

“For 13 years I’ve been looking at that from my car, and on that day I said, ‘We’ve got to do something,’” Chapel said. His friend Steve Davis, a board member at the Bloedel Reserve and the new Bainbridge Island Museum of Art, had been thinking the same thing. “Whenever I was at the museum site I’d think, ‘We’re building this art museum and look at how ugly that corner is,’” Davis said. What happened next is something Chapel calls a “Winslow Way miracle.” Johnpaul Jones immediately agreed to design the project pro bono.

The City of Bainbridge Island and Kitsap Transit, who jointly own the property, approved its transformation into a public space with two caveats: Neither organization would help financially, and any work done on the site had to leave the buried pollutants undisturbed. The Department of Ecology OK’d the project. Chapel and Weiland organized a steering team, and the support started rolling in. Bainbridge Rotary kick-started the donations with $80,000 and managed the finances. More than 8,000 households responded to a directmail campaign, giving $43,000.

The Bainbridge Island Museum of Art, itself in the midst of a capital campaign, gave $50,000. Weiland, who is an attorney, donated his services, as did other lawyers, consultants and geologists. PHC Construction and its subcontractors donated their labor, and Bainbridge Gardens provided a special deal on plants. The Parks Department agreed to maintain the Waypoint. “If this had been a commercial project, it would have cost three-quarters of a million dollars,” Chapel said. “It actually came out at about $270,000.” About 700 people donated time or expertise. “It was really inspirational,” Weiland said, adding that the community’s desire to contribute went beyond finances.

Several public suggestions, such as the use of native plants and a visual connection with the ravine and harbor, were built into the plan. Now, as Weiland noted, the corner is “a place to linger, not just pass through.” Benches and wide paths accommodate individuals and groups. Seven interpretive signs, created with the assistance of the Bainbridge Island Historical Museum, chronicle the area’s first peoples and modern Bainbridge history. For his years of community service and his leadership on this project, Chapel was named 2012 Chamber of Commerce Citizen of the Year and is serving as grand marshal in this year’s Fourth of July parade.

“We can’t think of any project that pulled the community together more,” Chapel said. “That is what we’re most proud of. Everyone said ‘yes.’” “What I love about this project,” Weiland said, “is that at a time in our country when we seem to be so divided, you can still find common ground to get things done.” 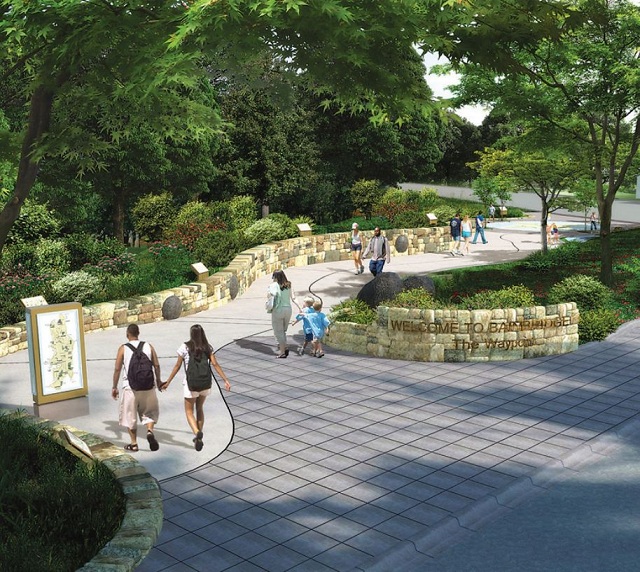