When four island teens volunteered to be part of a youth advisory group for the restoration and conversion of the historic Navy bakery into the Fort Ward Community Hall, they had only a vague sense of the skills, time and resources needed to pull off such a feat.

Now, youth advisors Aila Ikuse, Kate Merrifield, Erik Appleberry and Mark Dettman come to the end of their senior year well versed not only in the history of the building and surrounding area, but also in architecture, landscape design, fundraising, public presentation, grant writing and diplomacy.

The Fort Ward Community Hall project is a collaboration among several island organizations. The youth group is advised by project leader and Fort Ward resident Sarah Lee. Each member of the youth advisory group agreed to join the project for their own reasons.

Ikuse and Merrifield remember picnicking and tending to a chicken coop on the grounds of the unique brick building as far back as third grade. A tenant who lived there at the time welcomed kids and adults from the neighborhood to stop by and visit the property’s beautiful gardens. “We had such amazing childhoods here,” Merrifield said.

In addition to this deep feeling of nostalgia, Ikuse now feels a patriotic obligation to preserve the building and its tie to U.S. military history. Merrifield’s goals are about community unification. She wants it to be a place where people can gather for entertainment and enjoy the gardens.

She also sees it as a possible safe house to be used in case of a natural disaster or other emergency. Dettman’s attraction to the project is steeped in his passion for history. “My grandparents live in one of the old warehouses that they renovated here in Fort Ward.

I guess the history just rubbed off on me from my grandfather,” he said. He wants to make sure that the story behind the building and the neighborhood is not lost. Appleberry, known as the group’s most successful fundraiser, originally got involved to gain community service hours.

But he grew to discover that the work was not just a perfunctory obligation; rather, it enabled him to contribute to the fabric of his treasured childhood neighborhood and the future of this rich corner of Bainbridge Island.

All four youth advisors plan to stay involved in the restoration of the building. But as they head off to college, they also know that it is time to pass the leadership baton to a new group of energized Fort Ward teens. For 2016, the baton has been passed.

“They [the original advisory group] put in so much work. It’s our job to keep it moving,” Fox said. The new youth advisors are all still getting oriented to the myriad informational resources that the project’s adult board and youth group developed to promote their cause, as well as to their responsibilities as members of the youth advisory group.

Without question, the Fort Ward Community Hall is well on its way to completion, with enormous credit due to the dedication, charisma and leadership of the founding foursome. They have not been daunted by fundraising for the $300,000+ restoration price tag associated with the project, nor with all the pavement pounding required.

Equally tenacious, the incoming youth advisory group members are ready to roll up their sleeves and take on the hard work. Be assured, Bainbridge Island, the future and the past are in good hands with these Fort Ward kids. For more on the Fort Ward Community Hall project, visit fortwardhall.org. 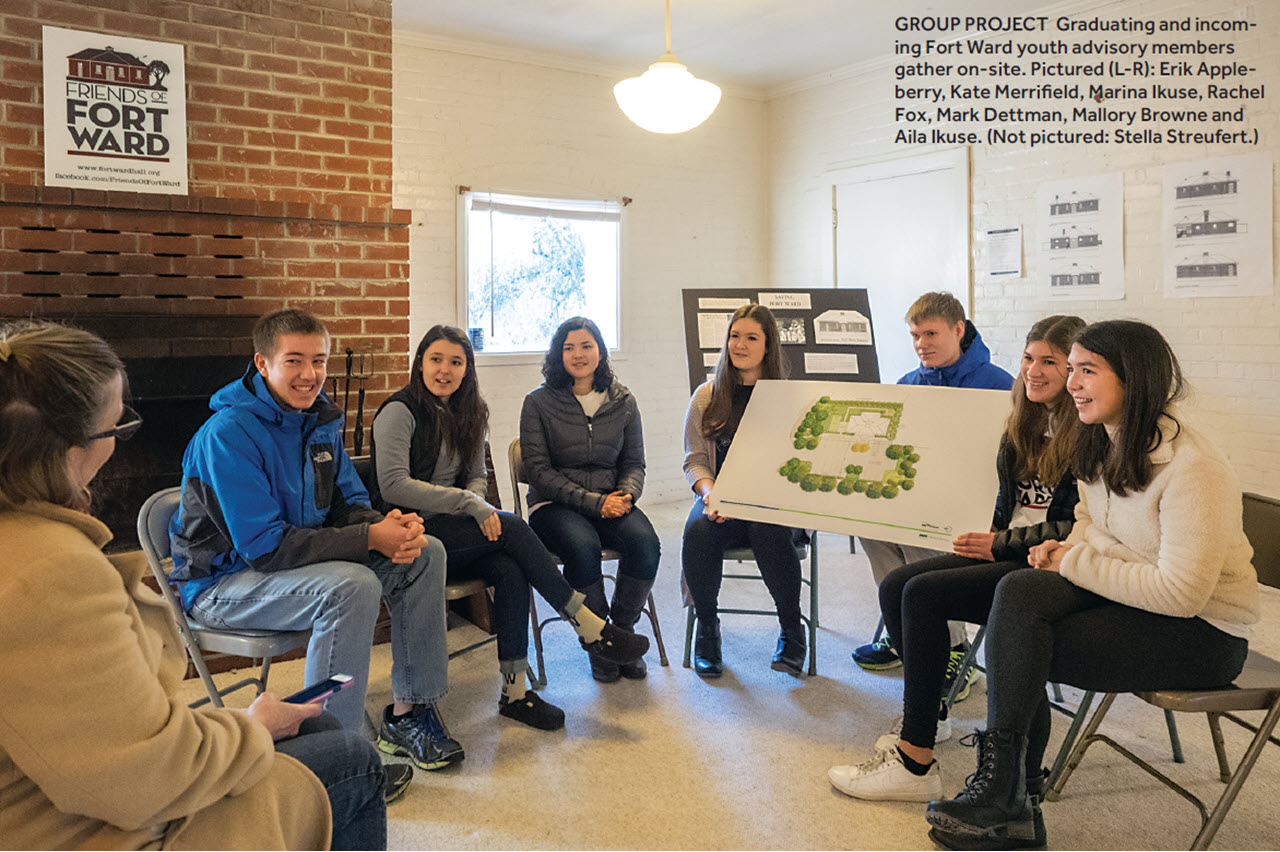 Why Is Fort Ward’s Park Called the Parade Grounds?