Peer into Ryderville Ink, the island’s only tattoo shop, and you’ll find a vintage O’Neill surfboard hanging on the wall, strands of holiday lights, and a brown couch with decorative pillows. Through the partially open door, you might hear an intermittent buzz from owner Tracy Lang’s tattoo machine, which sounds like a dozen pissed-off bees. Step inside and you’ll see a wood bar covered with paper, picture windows with a bird’s-eye view of Madison Avenue, and a massage table.

This afternoon Paul Bryant, a designer at Amazon, sits on the table, his upper body exposed, chatting about his new tattoo and occasionally swinging his feet. This is the first tattoo for Bryant, 53, but this isn’t his first visit to Ryderville and it won’t be his last. He’ll spend about 13 hours on that table before his tattoo is finished. Lang’s wearing bright green tights that match the tattoo on the back of her neck. She darts around Bryant, adding new lines with a pen and stencil, checking and rechecking the design, dipping needles into dark ink, applying them to Bryant’s skin, and wiping away the excess.

When Lang was growing up in Oregon she watched her uncle, a biker tattoo artist, practice his art in the ’70s and ’80s. “I was fascinated,” Lang said. Lang is self-taught—she practiced on friends and herself before she opened her shop—but she has a background in fine arts, which includes creating large-scale woodcut prints. “The transition to flesh wasn’t a big jump,” she said. Her job is to help people figure out what they’re trying to say through their tattoos. “I feel like I’m a conduit.” Lang also noted that most of her customers seek designs that are “super soulful” as opposed to something cartoonish or trivial.

Although Bryant designed his own tattoo, it’s a collaborative effort. Ganesh, Jesus, Buddha and others, as well as a Latin quote (that translates to: “May I be an instrument of peace”), occupy a fair amount of real estate on his skin. “It had to have meaning,” he said. “I was excited to get this. I’m excited when I see it. I think, ‘How soon can I come back in?’” He chose Lang because he admired her art and appreciated her artistic background. They speak the same language. “I showed her something I wanted, but I also wanted it to look like it was made by her hands,” Bryant said. He described his tattoo as a “work of art going in on my shoulder.”

Bryant’s body art might have raised an eyebrow a couple of decades ago, but tattoos are almost considered normal now. A 2012 Harris Poll estimates that 21 percent of American adults have a tattoo. Among 18-to-29-year-olds, that percentage is even higher—40 percent, according to a Pew Research Center report in 2010—but most prefer to keep their tattoos hidden under clothing. Bryant said he wasn’t worried about any social stigma associated with having a tattoo. “[At Amazon] you’re looked at as odd if you’re wearing a suit,” he said. Islander Brendan McGill, the owner and chef of Hitchcock Restaurant, has an eclectic tattoo collection that spans almost 20 years. He got his first tattoo when he was 16 at Midnite Sun Tattoos in Fairbanks, Alaska. “You start looking at your body as a canvas,” he said. Twelve years ago he discovered a Seattle tattoo artist called Jimmy the Saint; he’s been going to him ever since.

“You’re never really done,” McGill said. “Sometimes you’ll have a few bucks and feel like getting a tattoo.” The tattoo process is “mildly painful,” according to McGill, but then the endorphins kick in and you start talking. “It’s like being in therapy.” Like a good therapist, Lang acknowledges that people can be vulnerable when they come to her, and she doesn’t take their trust for granted. Renee Petheram, sales manager for this magazine, talked about the therapeutic qualities of her first tattoo, a Tracy Lang original, which adorns part of her upper back and peeks over one shoulder. She said she’d always been small in stature and insecure, but her “life took a new direction” around her 40th birthday and she decided to get a tattoo. “I wanted to channel my inner badass,” she said.

“People were very surprised,” Petheram said. “I was getting a lot of [positive] comments at the gym,” But not everyone approved of her decision. “My mother was not happy. When I posted [a picture of the tattoo] on Facebook, I blocked my whole family from seeing it.” Recently, however, Petheram attended a cousin’s wedding and wore a dress that revealed her tattoo. No one mentioned it, not even her 86-year-old grandmother. Being a badass might be a good thing after all. 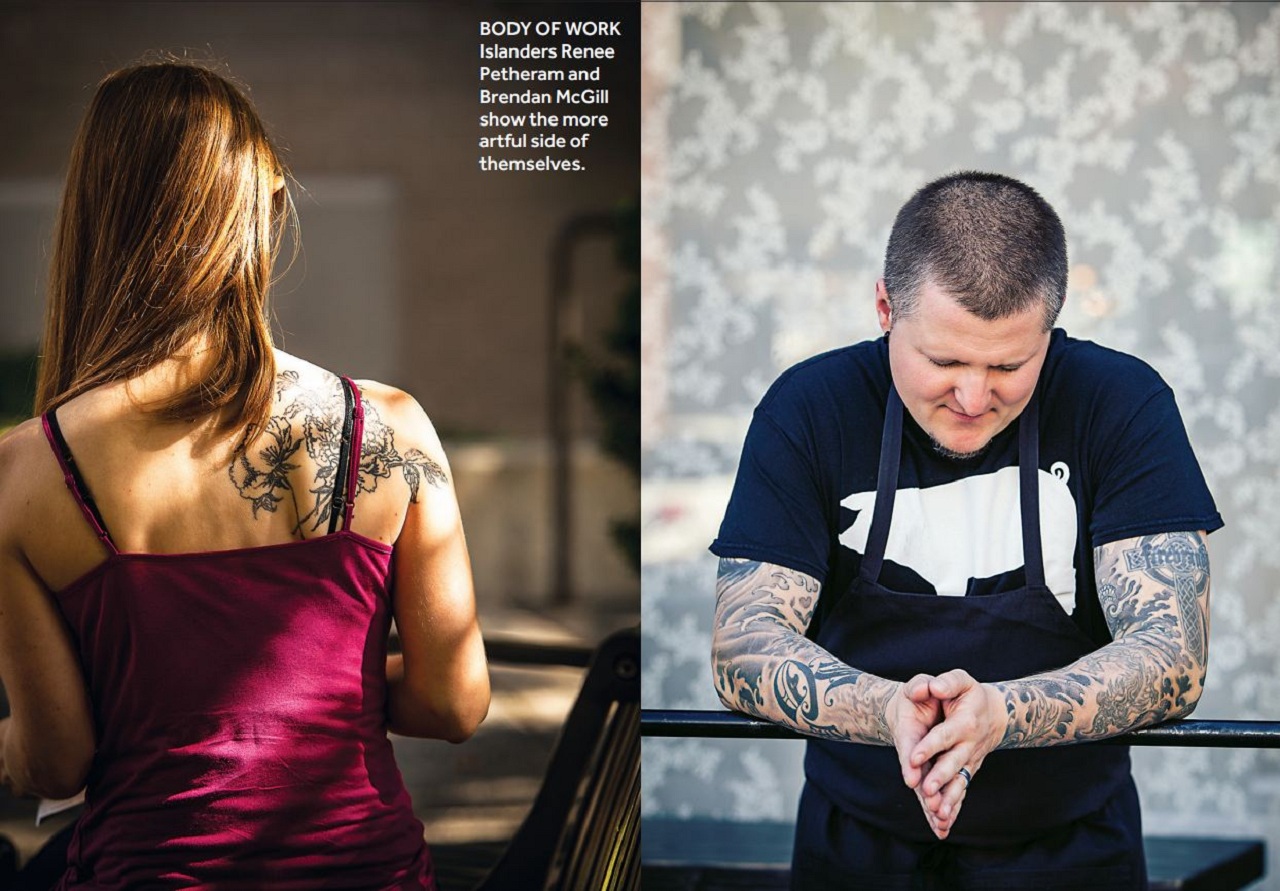 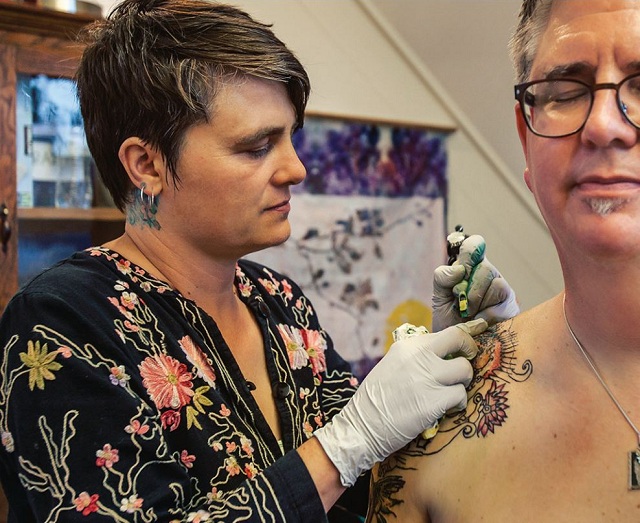