Cooks in the Kitchen // Sweet Dahlia Spreads the Love

Bainbridge Island has no shortage of upper-crust bakeries. Islanders spend Saturday mornings hanging out in front of one, then have Tuesday business meetings in another, and finally finish writing that novel in yet another. Blessed as we are with so many delicious purveyors of sweet and savory baked goods, it still seems there is room left for diverse interpretations of flour, butter and sugar combined. Which works out perfectly for Sweet Dahlia Baking. For five years, Sweet Dahlia Baking has been providing north Kitsap with scrumptiously daring treats like strawberry-basil scones, parmesan-black pepper biscotti and chocolate peanut butter “oinkers” (a bizarrely delicious combination of bacon, dark chocolate and peanut butter).

The menu looks like Willy Wonka had a hand in developing the bold and curious flavor combinations for which Sweet Dahlia is now becoming known. It’s little wonder that the menu is so charismatic—owner/baker Kate Berry is as adventurous and diverse as her signature baked goodies. A self-taught baker, Berry is a jane-of-all-trades. Her vocational past includes owning a graphic design firm, working as a color consultant, and personal fitness training. After years of giving homebaked gifts to her design clients, several urged her to sell her treats, including her signature lemon bars.

“When folks told me ‘you could sell these,’ I didn’t really know what that entailed,” Berry said. “But I decided to go for it.” Using all her own recipes, she rented space in a commercial kitchen in Kingston and began to sell her scones and biscotti in farmers’ markets in Kingston and Poulsbo, and to a Bainbridge institution, Commuter Comforts. “Commuter Comforts really helped me get started and have always been there by my side,” she said. Now delicious savories, such as Sweet Dahlia’s tarragon, bleu cheese and walnut scones, and sweets, like her pecan pie bars, grace the shelves of Town & Country, Central Market, and an everincreasing roster of coffeehouses as well.

Once business began to grow, Berry had to figure out where to relocate to keep the momentum going. She decided to build a custom commercial kitchen on Bainbridge not only to help her own business expand, but also to provide other local food artisans a hometown option for crafting their creations. Sweet Dahlia Baking moved into its own commercial wholesale kitchen in the Sportsmen’s Business Park on Coppertop Loop in January 2013, and has met legions of new fans almost every day. “We’re right underneath the TRX studio and Bainbridge Ballet, and we get folks walking by who are drawn in by the smells and want to see what’s going on in here,” Berry said.

Although the bakery does not have a retail storefront, plenty of locals place their order using her online menu, then drop by to pick up freshly baked treats and chat with the bakers. Sweet Dahlia also has a bowl of individually wrapped day-old and extra items that she gives away in exchange for donations to the Kitsap Humane Society. Berry and her husband live with two rescue pooches, and she’s grateful that scones and cookies can help out.

“We’ve raised over $2,000 for the shelter that way,” she noted happily. In addition to her creative design past, Berry has been a competitive rower for 32 years. Her energy and enthusiasm are assets to her business, where everything is mixed by hand and new creations come down the pike on a regular basis. “I like to experiment with flavor combinations. My treats may not be the prettiest, but they are hearty, big-flavored goodies.” 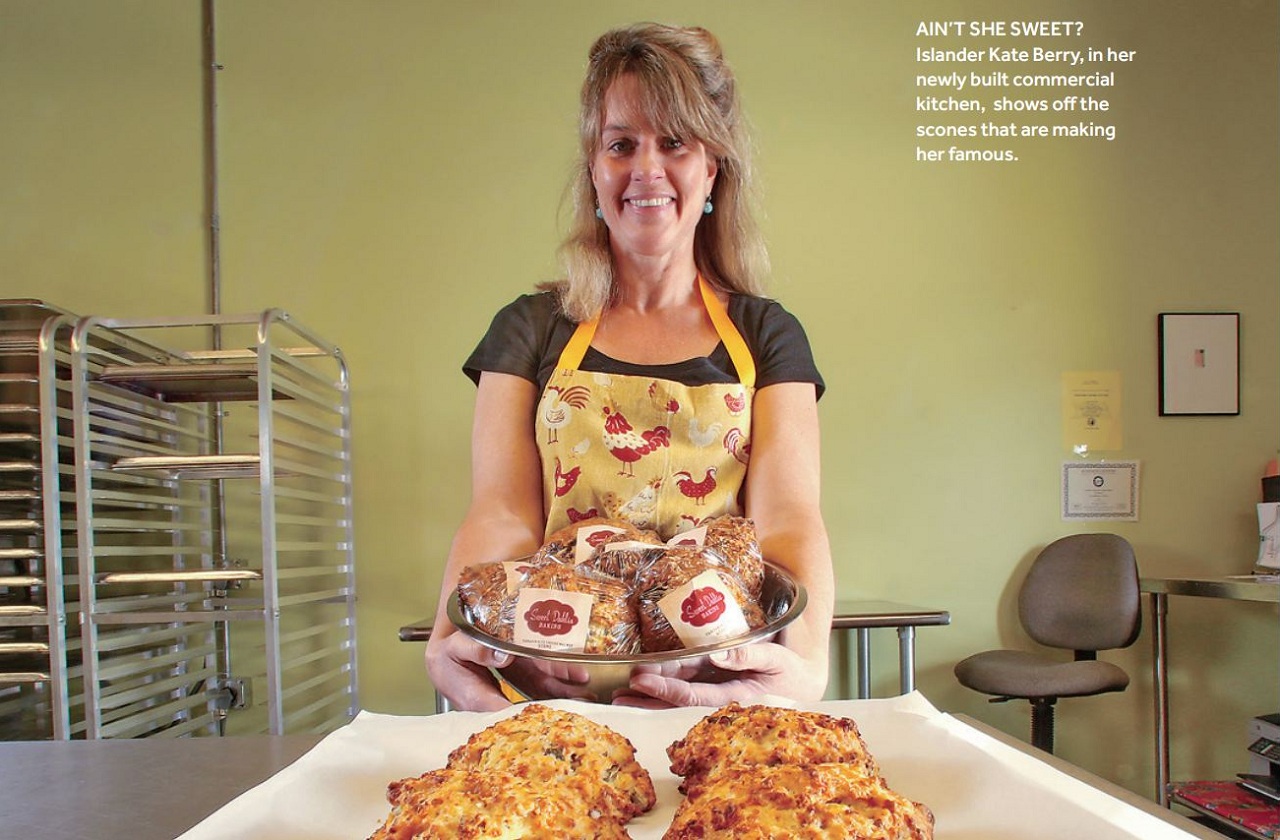 The Ferry Idea // Creating a Home for Aging in Place