Ahoy, Mateys // Life as a Liveabroad on Bainbridge Waters

For Some Folks, it’s not enough to live on an island surrounded by water—they would prefer to eat, drink and sleep while floating on the stuff. The liveaboard lifestyle, whether enjoyed in a boat tied to a dock or to a buoy in the harbor, epitomizes simplicity and freedom. For decades, boats and barges in various states of repair anchored out in Eagle Harbor. It was that rarest of rare commodities—a rentfree place to live—and an eclectic community of bachelors, couples and families took advantage of it.

Rich Seubert moved from a house on 30 acres in North Bend to a sailboat in Eagle Harbor in 2001. Now he lives aboard his 55-foot Grand Banks Kelly Bree, and he fondly remembers that earlier ragtag liveaboard community. “You had attorneys, you had artists, you had a retired NASA engineer. Everybody pretty much looked out after everybody’s interests.” But in 2010, after years of discussion with the City of Bainbridge Island, the Department of Natural Resources sent eviction notices to all the vessels permanently anchored in Eagle Harbor. In response, the city created the open water marina in 2011 to preserve at least some of this diverse community, charging a nominal fee to tie to fore and aft buoys or to the linear moorage.

Kelly Bree, home to Seubert and his companion Taylor Noel, is one of eight boats with current leases in the open water marina. Everything and everyone comes and goes by dinghy to Kelly Bree except for the occasional trip to the city dock to pump out the heads and take on potable water. The frugal, simple lifestyle appeals to Seubert and Noel. They enjoy hanging out in the spacious pilothouse, and watching storms, sailboats and rowing shells go by. “Some of the most miserable people I’ve seen are the ones that have a lot of resources,” Seubert said. “And that’s what it’s about, learning to be resourceful. Not too long ago one of the liveaboard guys out here made a little outboard motor out of a weed whacker.”

He said living on the water has taught him to “enjoy boredom,” and his recent recovery from a liver transplant has deepened his perspective. “Now that I’m healthy and strong again, I really savor this life.” Some liveaboards are former cruisers, like Gary and Sue Stephens, who are docked at the Harbour Marina in their current home, a 45-foot sailboat named Trinity. They have lived aboard nearly all their married life, sharing quarters until recently with their daughter, Amy. “I call this my waterfront condo, because it’s so big compared to anything else we’ve had,” Sue said.

In their cozy teak salon, they are surrounded by mementos of their cruising years, like the etched mirror that came aboard on Midway Island, or a photo of their previous boat, Pegasus. When not cruising, they work full time—Sue as a legal assistant, Gary as a diver—to replenish their savings. “This is such a frugal lifestyle,” Sue explained. “We bought fixer-uppers; we don’t owe anything on our boats. You can sock a lot of money away.” Despite cold winters and trekking up the dock to the marina shower, they love their vagabond lifestyle. “What you give up, you don’t find it a big deal after a while because you adjust to it,” Gary said.

“You realize when you get out in the South Pacific and see how poor people are that it’s crazy to pay $600 for a pair of Gucci shoes! So many things that people take for granted we don’t really care about. We’re almost hippies, but we’re not. We’re almost preppers, but we’re not. We have a lifestyle that’s totally free.” Sue echoed the idea that it’s not so hard to adapt to a simpler lifestyle. “I’d like to have a double sink,” she said, gesturing around the galley, where fruits and vegetables hang in nets, “and more shelf space.

But you learn to live with it.” Their daughter Amy started college this year, and Sue joked about Amy’s reaction to the size of her dorm suite. While most of the other kids were complaining about the small size, Amy’s response was, “What are you talking about? This is so big!” Given the freedom and allure of the liveaboard lifestyle, you have to wonder whether Amy will ultimately return to a life on the water. As Rich Seubert confided, “After living out here, I don’t think I can go back to a cul-de-sac.” 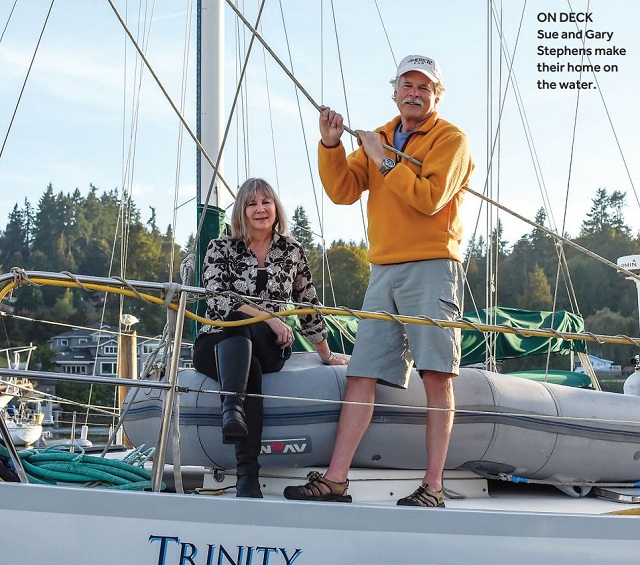 How Many People Live Aboard Their Boats in Eagle Harbor?

The Ferry Idea // Creating a Home for Aging in Place