A Running Start // Iconic Coach Hangs up His Cleats

Jim Whiting’s running career was almost over before it started. During a memorable 100-yard dash in the 7th grade, the self described “slowest kid in the class ”quickly found himself “looking at 59 sets of butts” and finished dead last.

It was ultimately peer pressure that convinced Whiting to give running another try. After his sophomore year at Stadium High School in Tacoma, a friend challenged him to try his luck running longer distances. Much to his surprise, Whiting found that he got faster as he ran farther.

The following fall, the kid who a month before thought he was “slightly faster than a receding glacier,” found himself the number one man on his high school cross country team. Encouraged by coaches along the way, Whiting competed throughout the remainder of high school and went on to have a distinguished collegiate cross country career at Whitman College in Walla Walla.

When Whiting moved to Bainbridge in 1994, he brought with him both a love of running and a belief, colored by his own unlikely success, that anyone could do it. Six months after arriving, Whiting set up the first All-Comers Track Meet, an event that would grow and evolve over the next 23 years to become part of the fabric of summer life on the island.

While Whiting thought that the meets would appeal primarily to adult runners, the majority of participants in the Monday evening events
turned out to be children. “Kids loved it,” Whiting recalled.

“It turned out, quite unexpectedly, that I’d hit a nerve. It just wasn’t the one I was aiming for.” The races regularly attract 150 to 175 participants and their families, with the youngest racers competing in the 3 years and under category.

Aided in the endeavor by assistant coaches Marianne Lindsey, Brenda McVay, Stephanie Rohl, Judy McLaughlin and Fred Bruner—whom he collectively refers to as the “Fab Five”—Whiting once again found that he had tapped into an unmet need.

“He really filled a gap at the time,” Lindsey said. “There was not anything for running beyond the summer track meets until you got into high school, so it fueled a beginning for kids to start running earlier.

”Among the hundreds of young athletes who came through his programs, Emma Brundige stands out to Whiting as one of the best. Now a runner at Bainbridge High School, Emma began attending the All-Comers meets in achievements.

Assistant coach Fred Bruner described Whiting’s coaching style as “totally inclusive, every bit as interested in the last runner as in the first runner. He wanted people to love to run.

”Whiting, now 74, retired from coaching at the end of the 2017 season and moved to Oregon to be closer to his grandchildren. The All-Comers track meets, under the leadership of Paul Benton since 2015, continue to go strong.

The future of Blazers Cross Country is less certain. Woodward Middle School recently started a cross-country program of its own, but thus far no one has stepped forward to take second grade and in fifth started competing with the Blazers.

Running with Whiting, she said, gave her confidence that she could succeed at a higher level. For every star like Emma, there were dozens of kids with more modest aspirations, sometimes as simple as running a lap or finishing a race without stopping. Whiting took equal interest in their the Blazers’ reins.

At the BHS cross-country banquet in May 2017, Whiting was honored for his contributions to youth running on Bainbridge. At one point, all the kids who had ever been a part of one of Whiting’s programs were asked to stand. It should come as no surprise that virtually everyone in the room came to their feet. 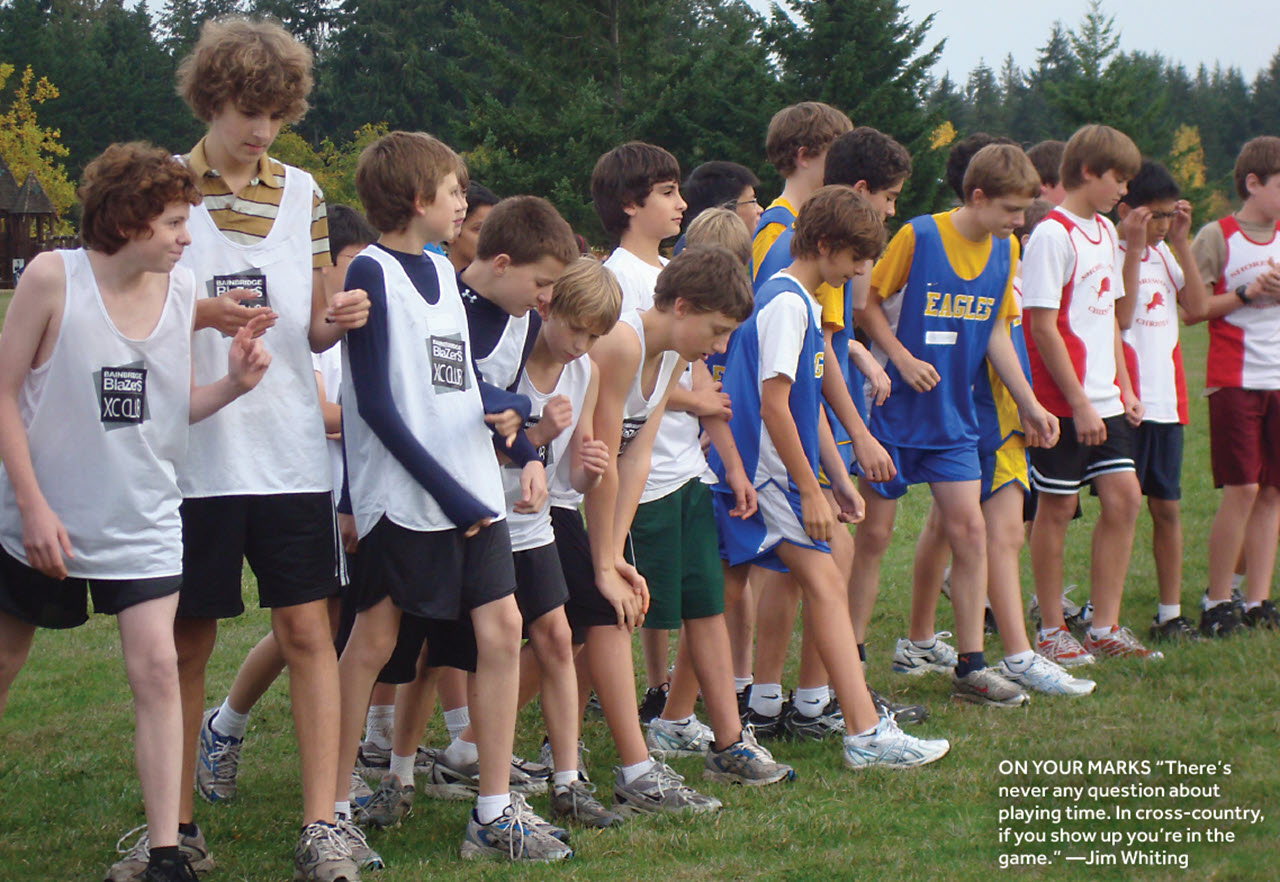