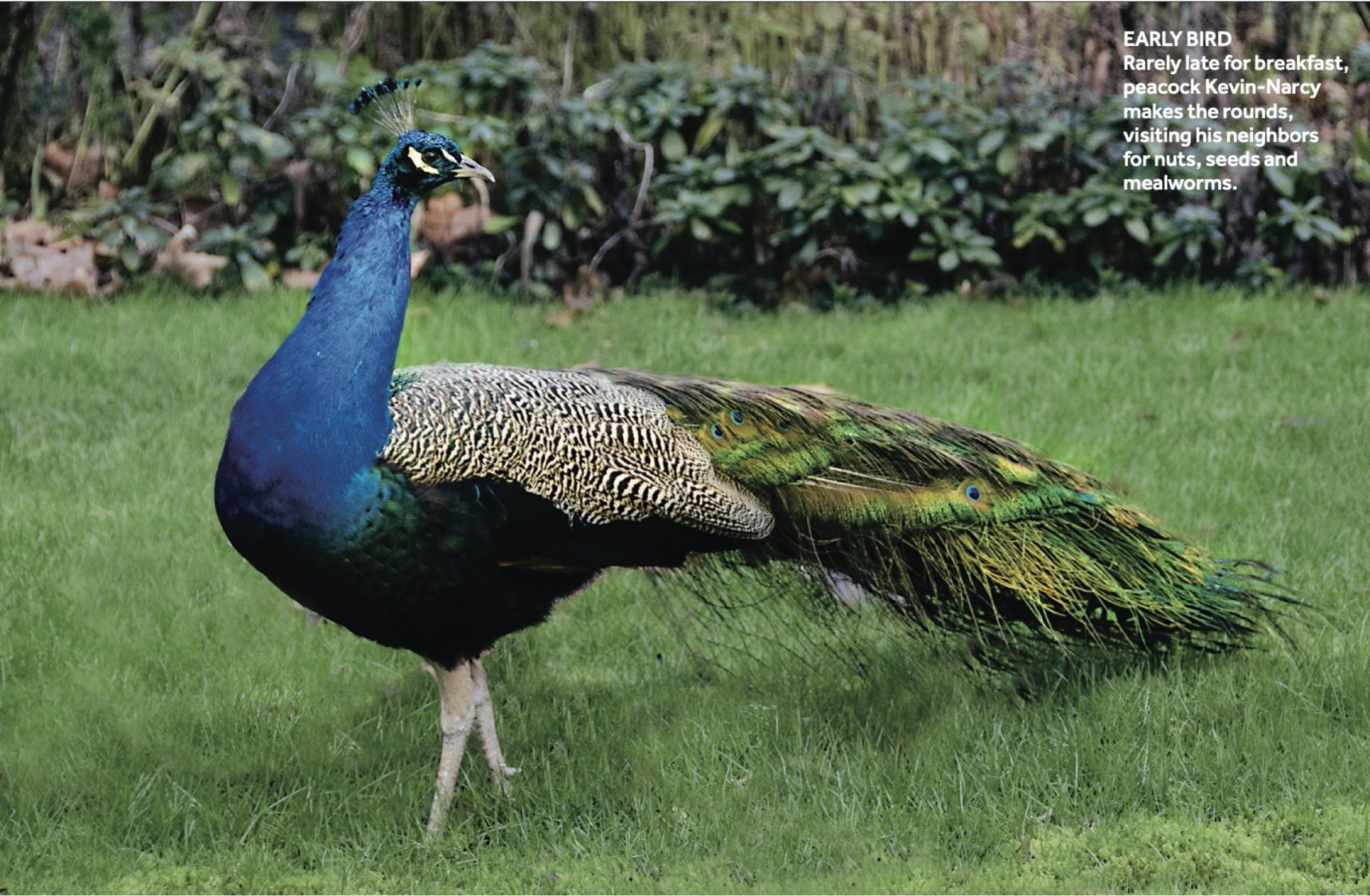 Bainbridge Island has been lauded for being the only place in the world where the chicken coops are nicer than the houses. But chickens, as it turns out, aren’t the only feathered friends receiving all-star treatment on the rock.

Every morning for nearly two years now, Maxine Steele gets out of bed awaiting a visitor to join her for breakfast. His visits are so routine that if he doesn’t come one morning, she might worry and send a text to her neighbors on Morgan Road and North Madison to see if they’ve spotted him.

Steele’s visitor is an Indian blue peacock, and every morning, without fail, he waits outside her door expecting a treat—usually shelled walnuts— and then moves on to the next houses in the neighborhood for his later courses: sunflower seeds from Marit Krueger, mealworms and grub from Elizabeth Morrow and an assortment of other snacks from the rest of the neighbors. It’s like a progressive brunch party for one.

The peacock was first spotted in the Morgan Road neighborhood in April 2018. Krueger was traveling at the time but received texts from a number of her neighbors. “Everybody said ‘you won’t believe it, but this peacock just showed up in the yard,'” Krueger recalled. They hoped he would stick around long enough for her to see him. He did.

Steele decided to call their new friend “Narcy”—short for Narcissus, in reference to how often he fawned over his own reflection in windows and glass doors. A 7-year-old neighbor dubbed the peacock “Kevin” after the colorful bird in the movie “Up.” Whether the neighbors call him Kevin or Narcy mostly depends on which side of the communal neighborhood field they live on.

When Kevin-Narcy first showed up at Morgan Road, he was what Steele described as a “teenager” in peacock years. His tail feathers hadn’t reached their full length. Several neighbors suspected he might be a lost or escaped pet. Morrow took charge of searching for his owners, contacting local farms and posting in a number of online groups.

“We tried desperately to find who his owners were,” Morrow said, “but we couldn’t come up with anything.”

In the meantime, Kevin- Narcy began to make a home for himself, and his neighbors warmed to him as well. At first, Kevin-Narcy was loud at night, but he eventually settled down. Then he took a liking to Krueguer’s hens.

“He ended up seemingly falling in love with a chick- en,” said Morrow. “He doted on her in a way that made all our hearts tender to him. At that point we just decided as a neighborhood that we were going to take care of him.”

Despite warnings that pea- cocks can become aggressive, Krueger said Kevin-Narcy is relatively calm. She guesses this is because he’s not com- peting for a mate or trying to assert his dominance around other peacocks. While he still enjoys the company of the chickens, they largely ignore his advances.

Kevin-Narcy typically visits each house in the neighbor- hood two to three times a day before going to roost in a near- by tree. Peacocks can’t fly very far, but Kevin-Narcy can make it about 80 to 100 feet up, according to Krueger, by flying from one branch to another.

Although his species is native to India, Kevin-Narcy doesn’t have too much difficulty with Bainbridge weather with the exception of snow. When Snowmageddon hit last year, he flew up to his roost and didn’t come down for several days.

“Finally, he came down and he was a wreck,” said Steele. “His feathers were all mat- ted. It really took a toll. We thought we might lose him.”

Steele said she sometimes worries about Kevin-Narcy as though he were a neighbor- hood child—describing herself as “extremely protective of him”—but she knows that he’s not a pet and could easily fend for himself with plenty of bugs and grass around to munch on.

The neighborhood has been warned that peacocks can live a long time, between 10 to 25 years, typically. But Steele and Krueger said they’d be perfectly happy if Kevin-Narcy decided to stick around a while longer.