FINDING THEIR PLACE IN ROLLING BAY // By Alli Schuchman 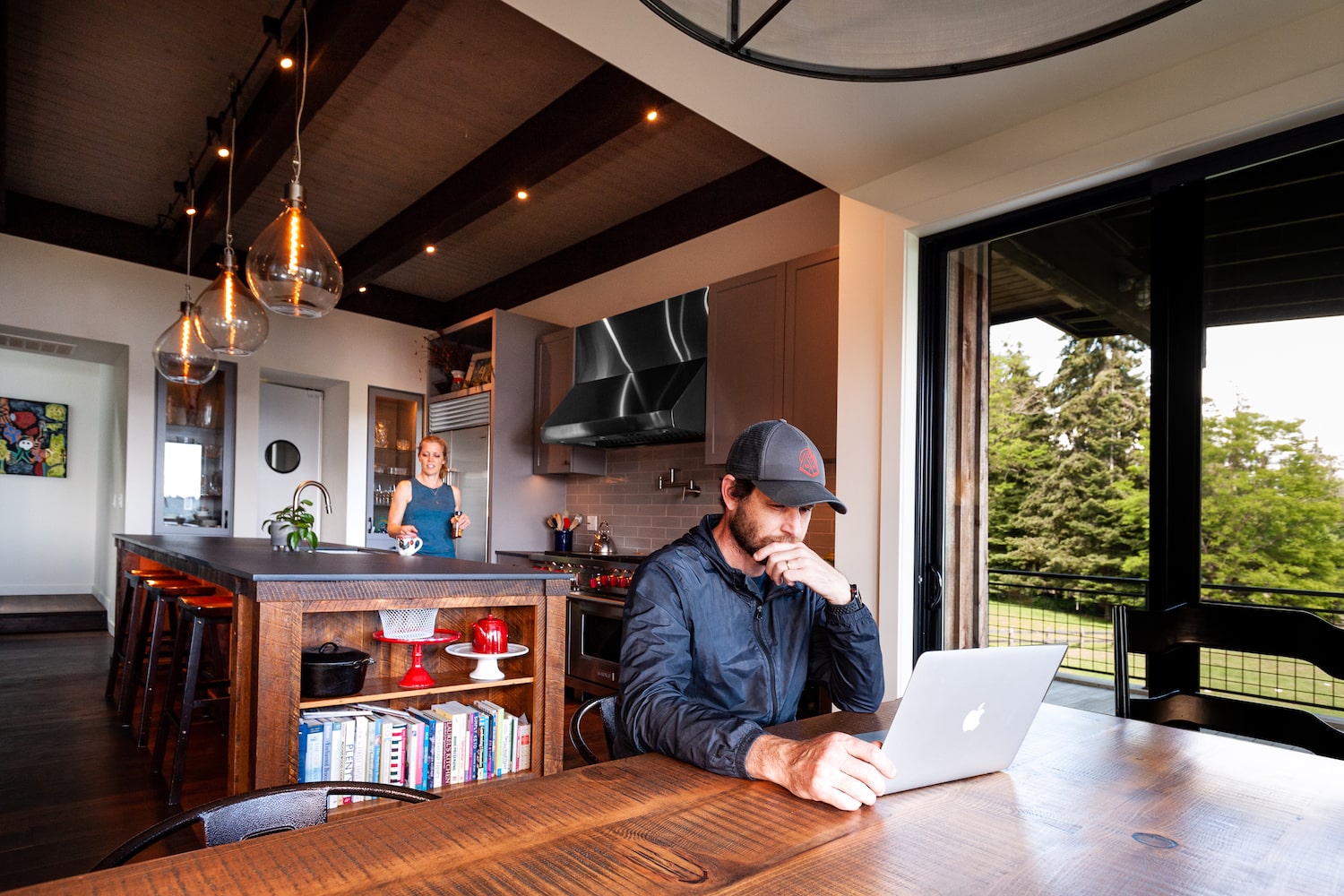 All of the furnishings in the home come across as genuine. Nothing feels forced. A perfect example is a coffee table that was hurriedly fashioned (moments before a cocktail party) from an old red door, salvaged from a decrepit shed on the property, laid atop two wooden vegetable crates. The speed at which it was conceived and built didn’t lessen its enduring appeal or utility…so it has remained. A bone-colored linen couch looks equally appropriate for an elegant get-together or an afternoon nap. The fixtures and lighting selections are lovely, but they don’t shout.

Adjacent to the great room at the home’s westernmost end is the kitchen. A massive hand-hewn wooden island with barstools serves as the perfect perch from which to keep the chef company. Matte gray cabinetry designed by Dave Poole from the Cabinet Factory in Eugene, Oregon, and Caesarstone countertops are muted counterpoints to the eye-catching commercial-grade Wolf cooktop, hood and refrigerator. A restaurant-style swinging door to the pantry, complete with a cheery round window, adds a playful wink to the space.

Near the kitchen and along the home’s backside rises a striking, spine-like floating steel and concrete staircase, made by Rory’s Custom Fabrication. One of the home’s most notable architectural features, the staircase is framed by eight windows, stacked four-over-four and spanning the height of the home, and leads to the bedrooms. From the opposite direction, leading to the walk-out lower level—and visible through the floating stairs above—is a wooden staircase with an industrial steel handrail, also made by Rory’s.

Downstairs is where the real fun begins. A home theater with both a flat screen TV and a pulldown screen and projector provides the perfect setting for movie nights. Standing watch from the corner, a life-size stormtrooper and Kylo Ren reveal one of Thomas’ serious passions: Star Wars. Ever since he watched the original trilogy as a child (“The Empire Strikes Back” is his favorite), the sci-fi movie series has caught and held his imagination.

Just beyond the theater is a shrine to another of Thomas’ passions: toys. A room of backlit custom-made glass cabinets holds a collection of thousands of figurines (many from Star Wars), mind-bogglingly intricate Lego sculptures, and precious memorabilia like a Star Wars thermos from his childhood lunchbox. Thomas said he regularly changes out what gets displayed; each rotation amounts to only about a third of his total collection. Watching the toy room come to life was not only a treat for Thomas, but also for Clark Construction superintendent Casey French, who Thomas said painstakingly configured the complex arrangement of shelving and cabinetry.

Clark president Jeff Krueger said that the way the room (as well as the entire home) came together—and the fact that everyone involved would describe it as having worked exceptionally well—is a credit to both the Chiymiys and the project team. “They were the ideal client,” said Krueger. “They understood the value of the team. They brought us in very early on and we spent a bit of time making some design adjustments, value engineering, and through that whole process, they stayed very engaged, very positive. And very realistic. What really stands out was just their pragmatism.”

Krueger said an example of the Chiymiys’ engagement came at the 11th hour when they decided to spend a little more money to add the deck to the studio space above the garage. “Andrea realized, hey, somebody is going to want to sit out on this deck and the views are spectacular. It was one of those times where the designer, the builder and client have a great level of mutual trust.”

The way the Chymiys chose to work with Clark—taking advantage of its guaranteed maximum price contract—gave the them a level of certainty because they knew costs would not unexpectedly rise. Often used in the commercial side of construction (where Clark founder and CEO Rachele Turnbull has substantial experience), the model appeals to Krueger because “you have to hit the sweet spot and then work hard to bring it in at or under budget. It provides a target that the team is really working not just to meet, but to beat. That changes your mindset. It brings a pretty powerful dynamic to the process.”

Krueger said that one benefit of controlling costs was that it enabled Thomas to have a little extra money to splurge on his toy room. “It was really fun seeing him display these things that are special to him and do it in a way that that didn’t kill the project or go overboard. It is one of those high watermark projects where you say this was just about as close to a perfect job as you can get.”

Thomas agrees. “Based on what I can tell, we hit it about as perfectly as you could.”

As much as the Chymiys love their home (and never plan on leaving), their appreciation for the neighborhood and finding their lasting place within it also runs deep. Like with the tiny old cottage that Andrea and Thomas kept and restored because it was beloved by neighbors, another feature of the property ties the Chymiys’ land to the greater community. Beyond the garden and chicken coop, across the grassy pasture to the east, is a gate in the split rail fence that runs between their land and the hillside above. They said that for generations, kids have cut through the land on their way down to the beach.

Though the farmhouse on Falk is a long ways away from Vanderbilt, this place, and the road that’s brought the Chymiys here, feels meant to be.